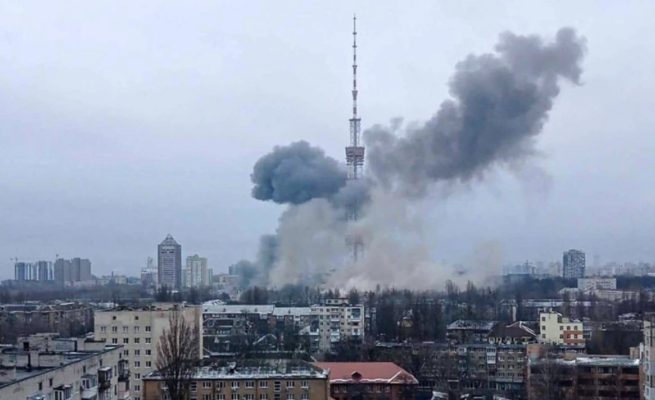 Russian forces are continuing their attempted push through Ukraine from multiple directions, while Ukrainians, led by President Volodymr Zelenskyy, are putting up “stiff resistance,” according to U.S. officials.

Russian forces moving from neighboring Belarus toward Ukraine’s capital, Kyiv, don’t appear to have advanced closer to the city since coming within about 20 miles, although smaller advanced groups have been fighting gun battles with Ukrainian forces inside the capital since at least Friday.

Russia has been met by sanctions from the United States, Canada and countries throughout Europe, targeting the Russian economy as well as Putin himself.

Russia claimed Wednesday to have captured Ukraine’s southern port city of Kherson, the largest Ukrainian city to fall to Russian forces since the start of the invasion.

Russia-backed separatist forces in eastern Ukraine have also seized several cities and towns, advancing nearly 100 miles since launching the offensive, according to Konashenkov.

“Ukrainian servicemen will go home as soon as they make a written pledge not to take part in the hostilities,” he said.

Meanwhile, Russian forces have “disabled” the instrument room of the the main television tower in Ukraine’s capital, Kyiv, “putting an end to information attacks on Russia,” according to Konashenkov, who noted that “no damage was done to residential buildings in the course of the strike.”

“Sixty-seven sites have been hit,” he added.

“In all, 1 502 elements of Ukrainian military infrastructure have been disabled in the course of the operation. These include 51 command and communications centers belonging to the Ukrainian Armed Forces, 38 S-300, Buk M-1 and Osa air defense missile systems and 51 radar stations.”