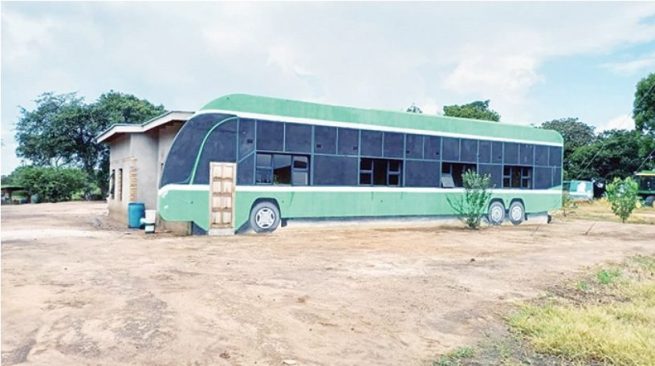 A FORMER transport operator has built a house which looks like a bus at his farm in Mvurwi.

Norman Muchineripi Mutsigwa, 73, who abandoned his transport business when it had a fleet of 14 buses, to venture into farming, built a bus house at his farm.

It has become a centre of attraction to travellers along Harare-Centenary Road, with many believing it is a bus parked in the field.

Mutsigwa, a member of AFM in Zimbabwe, told H-Metro his decision to come up with the house plan was to celebrate the history of his family and grandchildren.

“I was a taxi driver in 1983 and grew to become a transporter with mini buses and buses,” said Mutsigwa.

“The struggles I faced, as a transporter, are the ones which led me to build a house resembling a bus.

“It is for my family and grand-children’s history since I have left the transport business and ventured into farming.

“One of our local artists designed the bus for us.

“My wife helped in making sure the structure came out the way we wanted and we are pleased with this,” said Mutsigwa.

He narrated the challenges he faced in the transport industry.

“I agreed with my supportive wife to sell our buses to buy farming inputs and equipment,” he said.

More than 50 families rely on Mutsigwa who grows tobacco, maize and is also into poultry and cattle rearing.