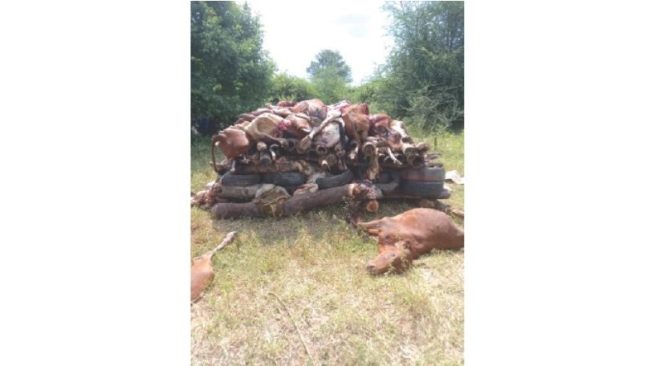 FOR illegally moving his 16 cattle from one province to another, a Gokwe farmer is counting his losses after they were intercepted by officials from the Department of Veterinary Services (DVS) and 12 of them were killed and burnt.

The animals were illegally moved from Mavimbi Village under Chief Chireya area in Gokwe North which is said to be a Foot and Mouth Disease (FMD) red zone area to Mabhangara Village in Sanyati district in Mashonaland West province.

FMD is a highly contagious viral disease of livestock causing fever followed by the development of vesicles (blisters) chiefly in the mouth and on the feet.

FMD is generally not lethal to adult animals but it can kill young animals and cause serious production losses.

The destruction was meant to curb the spread of FMD and the department was authorised to kill and burn the carcasses as the cattle had been moved without a permit.

The DVS said Mr Simukai Zvandasara of Mavimbi Village illegally moved 16 cattle but only 12 were found.

They were all killed and the carcasses were burnt as part of measures to control the spread of FMD.

Mr Zvandasara could not say where he moved the other four beasts to.

In an interview, Mr Zvandasara said on 28 February he decided to drive his cattle to a place in Sanyati district in search of better pastures.

Mr Zvandasara said during the great trek, he was intercepted by the police who then handed him over to DVS officers.

“The veterinary officers then said I was illegally moving my cattle before they killed them after which they burnt the carcasses.

I was so pained and I am still in pain because that was my only wealth as a communal farmer,” said Mr Zvandasara.

He said he was trying to save his herd by moving the cattle to better pastures in Sanyati.

According to a destruction and disposal order which was obtained from the DVS, Mr Zvandasara stood accused of illegally moving the cattle without obtaining a clearance.

His district, according to the order, is an FMD red zone and movement of animals without permit is prohibited.

He said Mr Zvandasara contravened the provisions of Animal Health (Movement of cattle and Pigs).

“Gokwe North district is a Foot and Mouth Disease red zone area and is under quarantine for FMD.

Now therefore, under and by virtue of powers vested in the Director of Veterinary Services, the director orders the destruction of the 12 cattle and safe disposal of the carcasses.

Mr Zvandasara was also given an order to avail four other beats for killing after they were not found on the day.”

Meanwhile, more than 500 cattle have already succumbed to tick-borne disease commonly known as January disease in the Midlands province since January amid indications that there is a new variant of ticks affecting the livestock.

The most affected districts are Shurugwi, Mberengwa, Mvuma and Gweru.