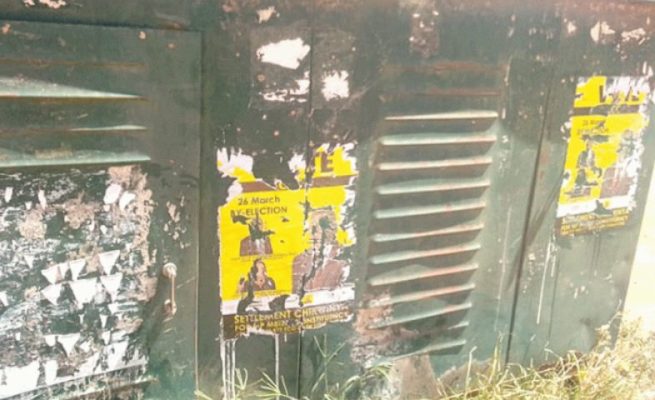 AT the turn of the new millennium, dozens of Zanu PF supporters turned up at a newly built lodge, Jessie Gardens and the guest of honour was Owen Ncube, better known by his moniker Mudha Mugabe then.

Ncube, that time a powerful figure boasting of close links to President Emmerson Mnangagwa, then a minister in President Robert Mugabe’s cabinet, was introduced as the owner of the lodge that now houses Zanu PF terror groups for specific operations.

The latest of the operations was the bloody attack on the Citizens’ Coalition for Change (CCC) rally addressed by party leader Nelson Chamisa last Sunday where Mbongeni Ncube was killed while over 16 were injured.

At the official opening of the lodge, Ncube invited the late musician Tongai Moyo to play to dozens of guests, including senior Zanu PF officials and students from nearby schools.

Jessie Gardens consists of two sections: rooms for lodgings on one wing with a separate entrance to the “garden” where there is a bar and pool table.

The lodge is built in the light industrial area of Mbizo Section 11, less than a kilometre from where the Zanu PF youths attacked the CCC rally.

Police on Monday confirmed that 16 suspects were arrested at the lodge while several weapons said to have been used for the attack were also recovered. Most of the suspects have since been released, according to reports.

National police spokesperson Assistant Commissioner Paul Nyathi said they were still investigating the violence that led to Ncube’s death and promised to look into allegations that several bases have been opened where the youths are housed.

“We are still conducting investigations as we said during the week,” Nyathi told The NewsHawks yesterday.

Asked whether the police have probed owners of Jessie Gardens over why they were harboring the “criminals” and the existence of terror groups linked to Zanu PF in Kwekwe, Nyathi said: “You are actually the first person to tell me about this. I still haven’t gotten anything from our Midlands team. Be that as it may, I will check with Midlands province police.”

Zanu PF insiders confirmed that Ncube is the owner of the facility but said it may have been a coincidence that the attackers had booked at the lodge.

Those close to the former State Security minister accused some within the ruling party of being the first to link Ncube to the attackers to portray him as a violent person, just as they did before Mnangagwa fired him from cabinet.

Ncube was accused of busing into Gweru a machete-wielding terror group he reportedly commands known as Al-Shabaab which he used to violently force his way into a Zanu PF provincial executive meeting.

The former state security boss refused to comment when The NewsHawks contacted him yesterday and hung up his phone.

But his loyalists insist linking him to the terror campaign in Kwekwe and last week’s attack was part of a scheme by his enemies within the ruling party to confirm that he was the cause of Zanu PF’s tarnished name in Kwekwe.

“We had a team from the national headquarters that came and investigated the issues raised about Touch Bomber (Ncube) and they are saying there is nothing that he did wrong. We expect those findings are made known and that he returns to cabinet,” a loyalist of the former minister said.

Ncube is accused of leading violent campaigns in Kwekwe and being the brains behind terror groups that continue to wreak havoc in the Midlands city.

It emerged that while Jessie Gardens is open to bookings, it has over the years become more of a brothel and has been turned into a temporary base to shelter Zanu PF activists for specific operations.

Another “base” for the Zanu PF youths in Mbizo is Black Wadada where the said youths spend most of their time devising their operational strategies.

Last week, aspiring CCC Mbizo member of Parliament Settlement Chikwinya said the youths, operating from Black Wadada and other bases, were defacing the campaign posters of other candidates ahead of the 26 March by-elections.

“We are well-informed that Zanu PF has begun reactivating its Al-Shabaab group such that on the night of February 23, they destroyed CCC campaign posters. They have established bases at Black Wadada, Rusununguko Creche, Tafara Crèche and Amaveni Hall. They have re-established bases where youths are operating from to go and destroy our campaign material. This is barbaric, this is not the new way of campaigning,” Chikwinya said last week.

Three motor vehicles were recovered at Jessie Gardens and a silver Mercedes-Benz (registration AFK 6958) owned by one of the accused persons was searched. Unbranded yellow T-shirts, one yellow bottom, one black trousers and one sjambok were discovered in the vehicle. In a black Honda Fit (AFC 3464), owned by another accused person, a machete was discovered.

In a white Toyota Chaser (ACK 0756), whose owner is yet to be established, one machete whose handle was wrapped in red cloth, as well as one homemade knife with a green handle, two catapults, two small catapult stones, one Tecno cellphone, one Nokia cellphone, one gold scale and two black and green caps inscribed ED were found.