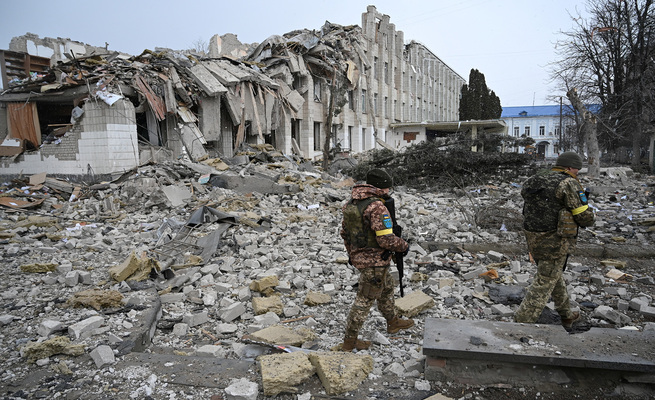 A fast-deteriorating humanitarian crisis is unfolding in Ukraine where hundreds of thousands of civilians are trapped in besieged cities without water, food and electricity as Russian troops continue to press deep into the country.

Since President Vladimir Putin ordered an invasion on February 24, two million civilians have fled the country in what is the fastest-growing refugee crisis in Europe since World War II.

For those still in the country, especially in cities under heavy Russian bombardment, hopes to escape continue to be squashed as several agreed-upon ceasefires fell apart.

Below is a breakdown of what is happening on the humanitarian front in Ukraine:

Cities under siege are running out of medicine, food and water, with residents melting snow to drink and cook food, aid groups and Ukrainian authorities warned.

“This situation is really apocalyptic for people, it is getting worse, they are running out of essential supplies,” Ewan Watson, spokesperson for the International Committee of the Red Cross, said.

“We’ve depleted our stocks. As I said, it stands to reason that people are coming to the end of whatever supplies they had.”

In Mariupol, in southern Ukraine, about 400,000 people have been pounded by heavy shelling after the city was encircled by Russian forces.

Overall, about 650,000 people across the country have been left without power and at least 130,000 have no natural gas supplies in the east, north and south, according to a UN report citing Ukraine’s energy ministry.

The UN High Commissioner for Human Rights reported 1,335 civilian casualties, including 474 people killed. Among the dead are 27 children. More than 860 people have been wounded. But the actual figures are “likely to be much higher”, it said.

Moscow has denied attacking civilians and has described its ground, air and land offensive as a “special military operation” targeting Ukraine’s military infrastructure.

But as of Tuesday, about 202 schools, 34 hospitals, and more than 1,500 residential buildings have been destroyed in the war, Mykhailo Podoliak, an adviser to Ukraine’s President Volodymyr Zelenskyy, reported.

Civilian infrastructure has also been damaged in Chernihiv, Bucha, Irpin, Korosten, Mykolaiv and Kharkiv, among other cities, the UN said.

“I cannot think straight, I can’t find the words. It’s barbaric, terrible,” Taisa, a pensioner from Kharkiv, told Al Jazeera as she looked to what used to be shops and houses in the centre of Ukraine’s second-largest city, now turned into rubble.

“The world is shaking, I just don’t understand,” she said, struggling to hold back tears.

The World Health Organization (WHO) recorded 16 attacks on health facilities, where nine people were killed. It said the country’s healthcare system is under “severe pressure”.

The aid group managed to deliver a batch of medical equipment for war trauma to Kyiv. “We may be in a race against time here,” Stokes said, adding it is uncertain on how long train access to the capital will remain possible.

The war has turned more than two million people into refugees while hundreds of thousands are trapped in cities under Russian fire.

On Tuesday, a convoy of buses that was expected to deliver humanitarian aid and take at least 200,000 people from Mariupol was forced to turn around because of what Ukrainian officials said was heavy fighting along a previously agreed upon humanitarian corridor.

It marked the third consecutive failed attempt to evacuate civilians from the city. Both sides trade blame for sabotaging previously agreed ceasefires. On Monday, Moscow announced new humanitarian corridors along roads leading to Russia and its ally Belarus – a move that Ukraine promptly slammed as “immoral”.

Ukrainian officials said 3,500 Ukrainians and foreign students were able to leave the northeastern city of Sumy to the Poltava train station. The evacuation came after days of shelling that flattened parts of the city and killed more than 20 people, including children, on Monday night.

People were also able to move out of Irpin, on the outskirts of the capital.