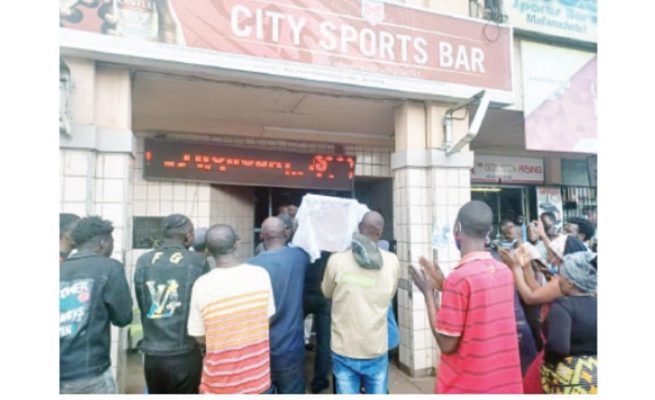 THERE was drama in Harare’s central business district (CBD) on Tuesday when mourners sought to take the body of a regular patron into the bar for an emotional send off.

The body of Norman Murengwe was paraded outside City Sports Bar along Kaguvi Street which he frequented.

Murengwe, who was popularly known as Nomara, died on Saturday after he was hit by a car in Ruwa.

When the hearse arrived in a convoy, some of the deceased’s friends paraded the coffin along Kaguvi Street.

They later took it to the entrance of the bar.

Their intention was to take the coffin into the bar but one of the joint’s managers, Harpers Mapimhidze, intervened and blocked them.

“No guys, you can’t take the coffin inside the club,” he pleaded.

“Please, I think this is enough.”

The men, who were carrying the coffin, pleaded with Harpers, who repeatedly turned down their request.

They continued with their parade, which blocked traffic, after the coffin was briefly put on the road.

According to one of the people who were part of the team which paraded the coffin, Murengwe was a mechanic, operating along Kaguvi Street.

He would, however, spend most of his spare time, drinking with his friends, in that pub.

“We know Nomara and he was one of our regular clients,” said Harpers.

“He was one of the guys who worked along Kaguvi Street, but would spend most of his time with us here.

“We couldn’t allow the coffin into the bar.

“I turned down the request.

“He used to spend a lot of his time in the City Sports Bar. So, his friends requested to parade the coffin here, and we accepted.

“We also participated in the parade and we are sorry to family, and friends, for the loss.”

Nomara was laid to rest in Goromonzi yesterday.