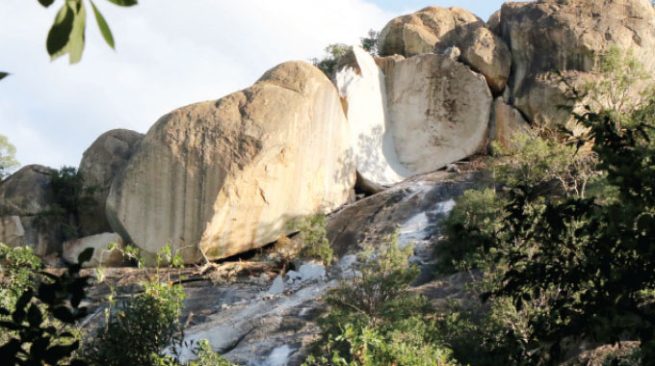 A ROCK split into two with the other half sliding down a mountain destroying vegetation at the sacred Njelele Shrine in Matobo district in what culturalists believe is communication of a bad omen.

Njelele is believed to be a holy place where Africans used to communicate with God before the place was desecrated by colonialists.

Some traditionalists still believe in its supernatural powers and visit the shrine to consult hence anything that happens near the site like the recent splitting of the rock, is believed to be of cultural significance.

A Chronicle news crew on Thursday visited the area and were directed to Dewe village head Mr Micah Moyo who took the news crew to the site where the rock fell.

He said the incident occurred on February 25 and the community is still looking for answers.

“This incident occurred on 25 February at about 2AM. Initially the community thought the noise was from a gunshot at the nearby national park.

“In the morning one of the villagers came and informed me that a rock had split into two at a mountain near Njelele but because of its proximity, it is safe to say the mountain is part of Njelele,” said Mr Moyo.

He said they organised themselves as villagers and visited the place.

“We were shocked at what we saw and we are still begging for answers. We hope that ukhulu (the custodian of Njelele) will organise spirit mediums so that they can consult the ancestors on what is happening. I believe the ancestors are communicating but we need to know what they are saying.”

The village head led the news crew to the site.

Many trees were felled by the rolling rock which knocked other rocks on its path as it slid down the mountain covering a distance of about 100 metres.

As the news crew approached the site, Mr Moyo started praying seeking approval from the gods to allow the news crew to take pictures.

Mr Moyo said once cultural rites are performed at the site, they will burn all the trees that were destroyed by the rock as it fell from the top of the mountain.

“That will be an offering to God,” said Mr Moyo.
He said since the incident occurred there has not been any visit by Government departments to assess the area.

He said ritual activities at the shrine were suspended last December but will resume soon.
Mr Moyo said the reopening of the shrine will coincide with the visit of the self-styled Mambo King Mr Mike Moyo.

A traditional healer Mr David Nduna Mlilo said the fall of the rock at the shrine could be some communication from the ancestors or God.

“This might be some communciation that some cultural issues have not been followed. Traditional leaders that include elderly chiefs and culturalists need to be consulted on the way forward. The problem is that most elderly chiefs have passed on leaving young chiefs who are ignorant of these things,” said Mr Mlilo.

He said custodians of the place should engage and then invite traditional leaders and culturalists to conduct rituals to appease God and ancestors.

“I think the gods and ancestors are angry and there is therefore an urgent need to conduct these rituals,” said Mr Mlilo.

Historian Mr Pathisa Nyathi said while the incident could be geological and scientific, the cultural aspect cannot be ignored considering the developments surrounding the custodianship of Njelele.

Mr Nyathi said the problem could be emanating from the delay in handing over the custodian of Njelele to the right person.

“The custodian of Njelele was called David Ndlovu and he was the custodian when I first went to Njelele. When he died his sister took over and when she also died a nephew called Mr Solufa Ncube took over the custodianship of the place as a caretaker. Mr Ncube was a caretaker while Ndlovu’s child was still young but now Mr Ndlovu’s son must takeover,” said Mr Nyathi.

“If that is what they are planning that becomes a very bad omen for the King. It is a very bad omen to be welcomed by such a thing. Secondly Njelele was desecrated so why would he go to a desecrated area. Look at what the rock has done as well,” he said.

The news crew visited the homestead of the shrine’s caretaker custodian, Mr Ncube and his wife MaNyathi said she was not aware of her husband’s whereabouts. She said he has been missing since December.

“The last time people visited the shrine he (Ncube) was involved in an accident.

The vehicle he was travelling in overturned and he was injured on the leg. I have not seen him since but what I can tell you is that something is not right. I don’t know where he is and he is no longer phoning me,” said MaNyathi.