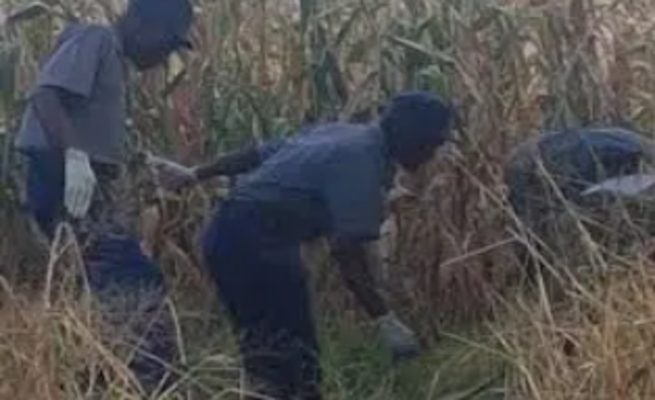 Police in Harare have found the body of a 32-year-old woman in a maize field in Waterfalls, believed to have been killed by unknown assailants while such cases continue to be reported countrywide.

The body was found with some bruises on the knees and a deep cut on the nose.

“The ZRP is investigating circumstances surrounding the death of a 32-year- old woman whose body was found lying in a maize field in Get Bucks area, Waterfalls with some bruises on the knees and a cut on the nose. A Huawei cellphone and a plastic bag containing $210 and US$1 cash were found on the scene,” he said.

The woman’s body was taken to a local hospital mortuary for post mortem.

In related case, police in Masvingo are also appealing for information which may assist in investigating and identification of the body of a man which was found in a maize field at Chesvingo area, last Thursday.

The body had some bruises on the left cheek and was taken to Masvingo Hospital mortuary for post-mortem.

Meanwhile, the Criminal Investigation Department (CID) in Chivhu is appealing to members of the public with a missing relative to also come and identify the body of another man at Chivhu General Hospital mortuary.

In a statement, Criminal Investigation Department (CID) spokesperson Detective Assistant Inspector Rachael Muteweri said the man is suspected to have been murdered by unknown assailants.

“The body was found on September 1, 2021 lying in a pool of blood on the veranda outside a shop in Chivhu Town with a deep cut on the forehead. The now deceased, who is approximately 33 years, and was wearing a black pair of trousers, a green jacket, and brown shoes and had no identification particulars on his person,” she said.

She said efforts to locate relatives of the deceased were made but in vain.

My husband Rovanai removes clothes & ur!nates in front of our kids: Jacqueline Dhoti cries in court

Cynthia Goba - 30 November 2022 0
A soldier from the Military Intelligence Department who allegedly took bribes at a roadblock at Bubi along Masvingo- Beitbridge Highway was arrested by Police...

My husband Rovanai removes clothes & ur!nates in front of our kids: Jacqueline Dhoti...

Cynthia Goba - 30 November 2022 0
A HARARE woman has been granted a protection order against her husband who verbally and physically abuses her when he’s drunk. Jacqueline Dhoti applied for...

Muza Mpofu - 30 November 2022 0
THE driver of a bus, which caused the pile up near Coke Corner along Seke Road in Harare yesterday said he deliberately hit a...

Cynthia Goba - 30 November 2022 0
SILOBELA man was shot dead after he approached his wife’s alleged boyfriend questioning him about the two’s alleged extra marital affair. The incident happened on...

Cynthia Goba - 30 November 2022 0
HANDLERS of Chillspot Records co-producer, Tafadzwa “Levels” Kadzimwe, have said they will comply with the authorities in their investigations. A complaint has been lodged with...

Armed robbers pounce on service station at midnight, get away with US$580 000 and...

Cynthia Goba - 30 November 2022 0
Armed robbers made off with more than half-a-million United States dollars in a midnight raid on a Kwekwe petrol station, police said. Police were called...

Muza Mpofu - 30 November 2022 0
A 39-YEAR-OLD Murewa man has been arrested after he was caught red-handed by his wife indecently assaulting his 13-year-old son. The man, name withheld to...

Muza Mpofu - 30 November 2022 0
A HOPLEY man and his wife claim they have been experiencing a mysterious “heatwave” whenever they try to have s_əx. Garikai Chikati (30) and his...

My husband Rovanai removes clothes & ur!nates in front of our...