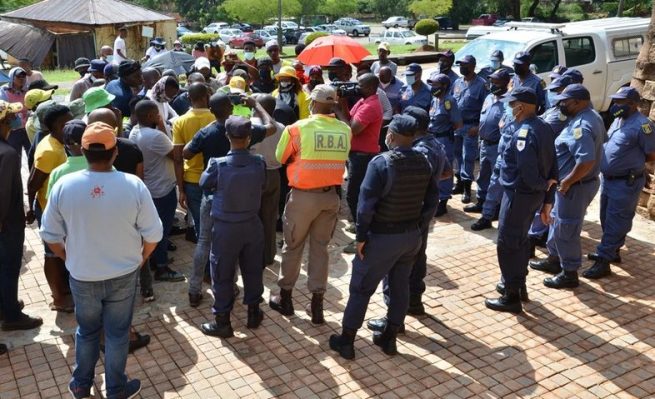 Newly formed anti-xenophobia group Kopanang Africa, which was established to quell the violent evictions of foreign nationals by Dudula groupings, has indicated that it was going ahead with its march on Human Rights Day despite threats of disruption.

Operation Dudula in Soweto and the Alexandra Dudula Movement have recently been embarking on controversial “cleanup” operations which sought to evict illegal immigrants from Johannesburg townships and from trading as street vendors in taxi ranks and business centres, with some of these turning violent.

Kopanang Africa’s Cleopatra Shezi said the planned march would include other organisations and a number of local and legal foreign nationals who had also been affected by the evictions led by the Dudula movements across townships.

“We are saying the Dudula movements must not violate people’s rights and that we think what they are doing is xenophobic because they take law into their own hands and this also affect people [foreign nationals] who have documents,” Shezi said.

She said Operation Dudula organisers had called on the march to be stopped which she said would go ahead as planned.

“We have applied with the police to hold this peaceful march. If we don’t hold this march, these groups will continue with their eviction of foreign nationals and present threats of xenophobia, hence we need to take a stand,” she said.

Shezi also dismissed fake reports on social media that the march would be against immigration laws and in defence of illegal immigration.

Foundation for Human Rights’ programme manager for vulnerable groups Sarah Motha said they were working jointly with Kopanang Africa on both the march and other advocacy initiatives aimed at quelling hostilities caused by Dudula groups.

“We have engaged with the police to ensure that it is safe. What we have done is ensure that we work with the communities in these areas because that is what Dudula people do,” Motha said.

The foundation has been holding dialogues for stakeholders to discuss the issue in one roof since eviction of foreign nationals flared up.

Alex Dudula Movement leader Simon Rati said the group was opposed to the march and that it planned to join it to hear what it was about.

“We talked about this march and heard it was against us. We plan to go to it but we heard that it will be cancelled. But we will still meet and decide about how we first engaged with its organisers before it takes place,” Rati said.

While he did not respond to calls and questions, Operation Dudula campaigner Nhlanhla “Lux” Dlamini took to social media and said it “looks like we have a street date with illegal foreigners, can’t wait”.

ActionSA leader Herman Mashaba, who together with his party have gained controversy over their campaign against illegal immigration, described the planned march as “a low hanging fruit” for law enforcement agencies to look for undocumented migrants.

“They are marching and sympathising with wrong people. Obviously this march is going to be joined by undocumented people. The state and law enforcement institutions must be there and ensure that those who are illegal are arrested and deported to their respective countries,” Mashaba said.

Provincial police spokesperson Brig Mathapelo Peters had not responded to questions about what measures would be put in place to ensure safety of the marchers in light of the threats to stop it.

Videos & Pics Muza Mpofu - 26 May 2022 0
China and Russia's air forces conducted a joint aerial patrol on Tuesday over the Sea of Japan, East China Sea and the Western Pacific,...

Sports Cynthia Goba - 26 May 2022 0
RELATIONS between suspended Dynamos coach Tonderai Ndiraya and the club’s board chairman, Bernard Marriot Lusengo, have been excellent in the last two years. That is...

News Cynthia Goba - 26 May 2022 0
ONE kilometre from Siachilaba Business Centre in Binga District, Matabeleland North Province, is a couple that is revolutionising waste management in the rural areas...

JUST IN: Grade 4 boy produces a gun in class in Harare

News Muza Mpofu - 26 May 2022 0
A GRADE 4 pupil brought a gun into his class at a Harare Primary School while one of his classmates recorded a video on...

News Tshuma Rueben - 26 May 2022 0
TEN armed robbers pounced on Gokwe South Town Council warehouse and made off with solar panels, water pipes, among other equipment, on Tuesday night. The...

News Muza Mpofu - 26 May 2022 0
A USER of popular short video sharing platform, Tik Tok, landed himself in soup after posting a clip in which a uniformed Chinhoyi police...

News Cynthia Goba - 26 May 2022 0
TEACHERS have given government a one-week ultimatum to address their salary grievances or face a crippling strike action beginning June 1. In a letter seen...

There is no law which prohibits ZEC from being run by army: Zimbabweans told

News Muza Mpofu - 26 May 2022 0
THE Zimbabwe Electoral Commission (Zec) said there was no law prohibiting the elections management body from being run by the military. “You talk about the...