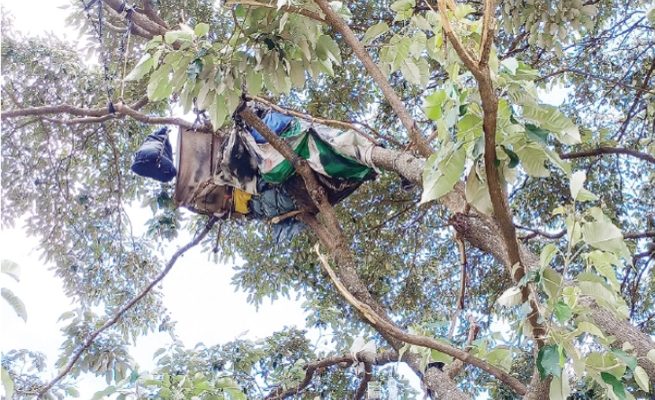 A 57-year-old homeless white man has turned a tree into his makeshift home.

The tree is at the Avondale Primary School grounds.

Flight Garry Paul told H-Metro he decided to live in the tree because, unlike on the ground, he can’t be harassed by the City of Harare municipal officers.

However, some reports claim he has become an unwelcome tenant at the school.

There are even claims he undresses himself in front of the pupils, and uri_nates on the school grounds.

He is widely known, within the neighbourhood, as Ray.

“He has been staying in the tree for more than a year now,” said one of the groundsmen.

“He sometimes undresses in full view of the pupils and urin_ates in front of them to scare them from the grounds.

“We tried to warn him but he is a dangerous person, he is highly trained as a karateka.

“We cannot risk our lives by getting close to his area and the children now have to play far away from where he lives.”

But how did Garry come to live in the tree?

He said he has been relying on food and clothes donated by the Celebration Church.

He claims he sometimes visits the church for spiritual guidance.

“I am quite comfortable living in a tree than on the ground where dangerous things are found,” said Garry.

“I rely on uncooked food like porridge prepared from cold water since I hardly find warm or hot water.

“I do not need accommodation but better clothes, and shoes, which can protect me from snake bites. There is no one to entertain me and I interact with people when I visit church on Sundays.

“I have no children and never got married and I do not need a wife.

“I do not know if people around here, including school children, are afraid of me but I do not scare them at all.”

He said he was a printer.

“I am capable of printing but I am no longer interested in working since I am now an old person.

“If you may, please tell people to join me in celebrating my birthday on the 23rd of this month.

Garry crossed the border in 2011 to South Africa where he stayed for almost 10 years.

He appealed to health officials to attend to him but not with the intention of trying to convince him to leave his tree.

On the tree, is a well-prepared nest, with some clothes hanging from the branches, where he sleeps.

Close to the tree are some power lines.