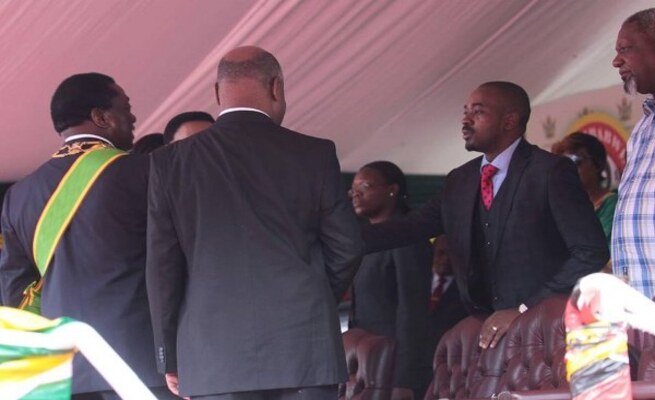 There is alarming violence targeting CCC supporters across the country ahead of the Saturday by-elections, with Zanu PF and the police accused of being the main perpetrators.

The violence claimed the life of a CCC activist in Kwekwe recently, while several other victims have been left nursing wounds after thorough beatings by suspected Zanu PF activists and the police.

Some activists have allegedly been assaulted while in police custody.

Addressing thousands of party supporters at Sakubva stadium in Mutare, Chamisa accused Mnangagwa of angrily resorting to violence after he turned down his officer for an inclusive government.

“We refused an offer for a government of national unity (GNU) and said let’s go to elections; those who have won will lead and those who lose will support the winners either as opposition or united government, but we will not make the mistakes we made under former late president Morgan Tsvangirai,” said Chamisa to massive applause.

Tsvangirai entered into a GNU with the late president Robert Mugabe in 2008 after the harmonised elections were widely condemned as not free and fair.

But the GNU was marred by reports that Mugabe’s Zanu PF was deliberately reneging on the agreement to collapse the inclusive government.

Mnangagwa has now set up torture bases to punish the opposition for rejecting the GNU offer, Chamisa claimed.

“Zanu PF then resorted to setting torture camps and bases and they are back to their old self,” he said.

MDC-T leader Douglas Mwonzora has been accused of working with Mnangagwa to sell the GNU agenda.

“The reason why we are here is to preach about change. Our hands are not full of blood,” he said.

“Our hands are full of peace. Zanu PF will not provoke us into violence.

“We have the people and we can overwhelm them, but we are not going to be provoked at all.

“When we are in power, police are not going to abuse their power by beating up people.

“We have heard people saying Zanu PF can rig elections, not this time.”

Chamisa was in Mutare to drum up support for the CCC’s aspiring legislators Regai Tsunga and Prosper Mutseyami, who are eyeing the Mutasa South and Dangamvura/Chikanga seats respectively.

There are also a number of vacant local government seats in the Mutare council following the recall of MDC Alliance councillors by Mwonzora.

The CCC last week stopped short of saying it will boycott the by-elections in protest over the contested voters’ roll.

The opposition party demanded that the Zimbabwe Electoral Commission (Zec) use the 2018 voters’ roll for the by-elections, which was also exposed to have massive irregularities by data analysts.

Zec has not responded.

Saturday polls are likely to settle the question on who is Zimbabwe’s leading opposition political leader between Chamisa and Mwonzora.

Chamisa’s newly formed CCC has been pulling huge crowds at its rallies and yesterday’s event was no exception.

On the other hand, Mwonzora’s campaigns are being attended by a handful of supporters.