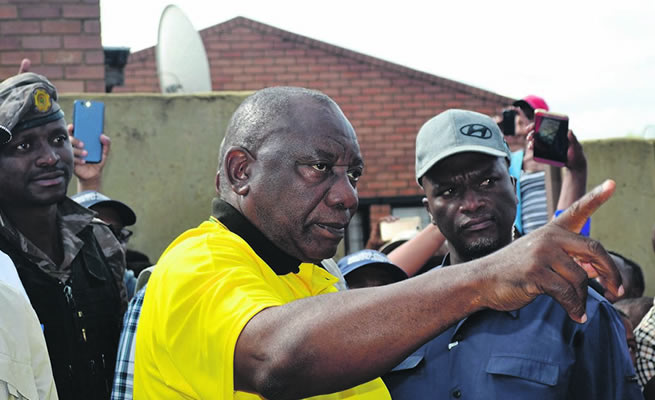 “I want to take this occasion to address employers in this country, including in hospitality, agriculture, transport and other labour-intensive sectors. When employers knowingly hire undocumented foreign workers, they are breaking the law,” the President said on Monday.

He made these remarks during the 2022 Human Rights Day national event at the Reagile Community Centre in Koster, North West.

“Those who want to live and work in South Africa must, however, be documented, and have the right to be here [and] work here,” President Ramaphosa said.

He said the Departments of Home Affairs and Employment and Labour continue to engage with employers to ensure compliance with the immigration and labour laws of the country.

SHOULD FOREIGN NATIONALS NOT BE EMPLOYED IN SA?

During his address, Ramaphosa said employers should “Employ our people, train them and treat them well.”

Ramaphosa said when employers knowingly hire undocumented foreign workers, they are breaking the law. They are contributing towards social tensions between south africans and foreign nationals who either live in South Africa or have taken refuge.

“We should not allow ourselves to be at war with people who come from countries beyond our borders. It’s unSouth African,” he said.

On Thursday, chaos erupted between seasonal workers from Lesotho and Zimbabwe over alleged competition for farm space between the two groups.

Western Cape Chief Inspector, David Esau said there are no records from the Department of Employment and Labour indicating that corporate visas were issued for any foreign nationals to work on the farms. This prompted the department to launch an investigation into the allegations.

Ramaphosa said South Africa is facing challenges of unemployment but that should not mean that locals should wage war with people from other countries.

“Once we do that we envole the spirit of xenophobia,”he said.

The President also touched on the recent protests against the employment of foreign nationals.

“Operation Dudula and all these other movements are contravening the law. We must collectively deal with the issue as South Africans…let us be wise, let us not be violent and remember that we are a country of diverse people. Let us remember what the freedom charter says…South Africa belongs to all those who live in South Africa,” he said.

“As a country founded on tolerance, respect for diversity and non-discrimination, we must never allow ourselves to turn against people who come from beyond our borders. Like those countries that gave us shelter during the dark times of apartheid, we must be a welcoming country, particularly of refugees fleeing persecution elsewhere,” the President said. – Work In South Africa