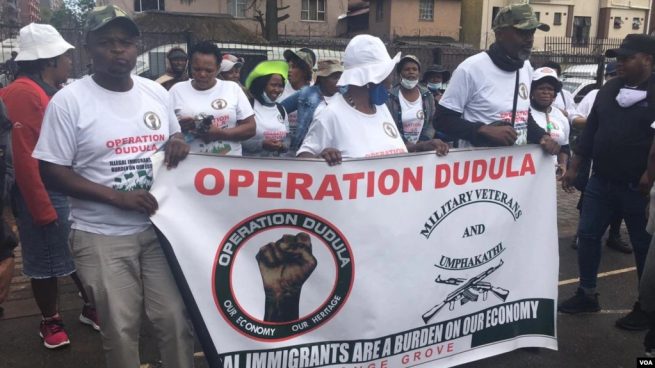 Operation Dudula’s Durban wing was on Friday denied permission to hold a march on Sunday.

Metro police spokesperson Snr Supt Parboo Sewpersad confirmed to TimesLIVE that the city had denied the application filed by the march organisers.

Sewpersad said after lengthy meetings with city officials and the metro police, the organisers on Thursday put forward an application to have 500 people gather at Gugu Dlamini Park in the CBD and then march through the city.

“They submitted an application in terms of the Gatherings Act 205 of 1993. Following the meeting, and after careful consideration of the application, the city took a decision on Friday afternoon to decline the application.”

This meeting was one of two between march organisers who had earlier in the week met with senior police members to discuss their plans.

KwaZulu-Natal police commissioner Lt-Gen Nhlanhla Mkhwanazi said during the meeting, police tried to ascertain what the march was about.

“We warned them [march organisers] about the law, that they have a right to march and gather but if they go into people’s premises’ they will be breaking the law,” he said.

SAPS and metro police remain on high alert after the city’s decision.

Operation Dudula, which mushroomed in Soweto, Gauteng, last year has in the last few weeks dominated headlines as its members wage a campaign to root out what they claim are illegal immigrants living and operating businesses in their areas.

The operation, which appears to have a strong following, has in the last few weeks gained momentum in other parts of the country.

It has however received criticism from some political parties who have accused it of targeting vulnerable members of society.

On Thursday, the national leader of Operation Dudula, Nhlanhla ‘Lux’ Dlamini, was arrested in Johannesburg in connection with the movement’s raid on a Soweto local’s home, alleging it had received tip-offs he was selling drugs.

Dlamini remains behind bars and will return to the Roodepoort magistrate’s court on Monday when he will apply for bail.

He has called for Operation Dudula members to continue with their operations in his absence.