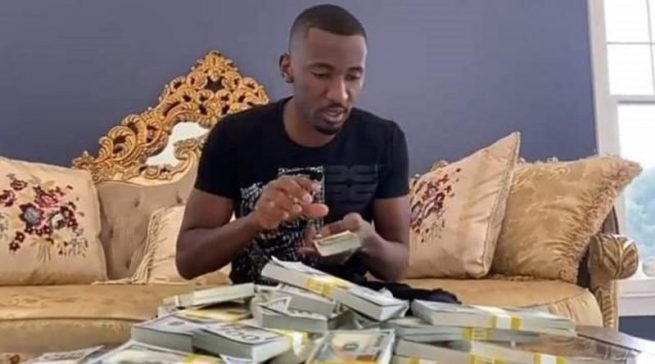 HE claims he misses the late Ginimbi.

And, he feels, he must have angered Sir Wicknell over a joke about his size.

There is always drama, and some fireworks whenever Prophet Passion Java speaks, especially in front of cameras.

That was the case last week when he appeared on the DennyJ podcast.

“Who is that?” he asked when Shadaya was mentioned. “Maybe he follows me, who is that? I am the undefeated champion because I play psychological games on social media.

“I just become me in front of a camera and people like me.

“I just do what I do, some people hate, some they like. The message to everybody, viewing me, if you are not that gifted, then you don’t have haters.”

He addressed the beefs he has had with a number of prominent figures on the local scene:

“Ginimbi was my guy. I always talk with his family and I passed my condolences. Of course, I went to the funeral at Doves but kumba, I saw it that people vanenge vaipinzwa due to their faces. Paiitwa chiface, I looked at the faces there and their skins. So, I didn’t go. There are some people who took my games with Ginimbi personal, but we used to talk on the phone. But pamwe pacho ndaimukobora hangu, ndozoti sorry hangu but chibhakera chinenge chasvika.

I used to go to his house, I would also send Mudiwa. I felt that there were some people who took it personal. So, zvaisaita ndiende kunhamo. But, I miss Ginimbi, the street is dry, ndangosara ndega chibaba, ko vamwe vari kupi? Madam Boss seems to be number two.”

“Muface wangu, Wicknell has money, I only asked that how many minutes does he take to put on a jean? It was a question but some took it like a beef. He is my friend, there was a time when people lied that he posted about me. We talk and it’s now two years, I have his number. Ndogona ndisiri muface wake, but inini muface wangu.”

“I am different from Sekuru vaLicious, Tatelicious, anotaura zvinhu zviri damaging to people. Mine are entertaining, I can’t say something damaging. I have to think what will happen to their children at home, and wife at home. Sekuru vaLicious vanongokuvadza vanhu, and the relatives get emotional. My jokes are entertaining, they don’t hurt. Even during the days, I would have disses with Towers, he would laugh.”

“I was the rat and ivo kubva vaita kitsi, she was Tom and I was Jerry. Mai TT is a very good person, people don’t understand her, you always know kutamba kwaTom and Jerry, chii chinozoitika pekupedzesera.”

In terms of performance, my list is Winky D, Jah Signal, Jah Master. Calaz released four albums recently, but tell me, which songs are in the limelight? We have somewhere where we understand each other, pane patinoziva, ndomashoko angu ekupedzisira.”