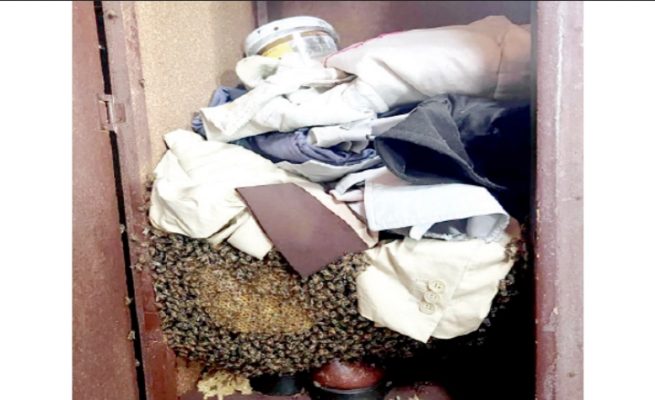 A Lupane man (name supplied) who paid an inyanga to give him juju to make him rich regrets the day he stepped into the diviner’s yard after the object of magical powers turned into bees that have been residing in his bedroom’s wardrobe for 32 years.

Not only did the juju turn into bees, but it created a bee hive that birthed goblins that tormented him and his family.

The goblins that came at night saw the man’s daughters desert his home as they were raping his wife and children as they slept.

When his daughters left, the goblins turned on his wife with vengeance.

But that was not enough – the insatiable beasts started sod0mising the man!

So bad were the se_xual assaults that the man has not consummated his marriage for over 10 years.

It seems the juju thrived on the man’s misery as the man’s children have been unlucky in love – all seven of them are not married and they have no children.

The ones that were lucky to get jobs soon found themselves jobless as they got fired. The money the man and his children made mysteriously disappeared.

Years ago, the man tried to get rid of the bees by burning the wardrobe, but they flew away, only to return after he acquired a new one.

He ended up leaving his bedroom and constructed another one.

He went back to the inyanga and asked him to take back the juju, but the inyanga told him it was impossible as the man had not followed instructions on how to use the juju to get rich.

The juju had turned on the man because he had not done what the inyanga had told him to do!

All his efforts to get rid of the juju failed until now.

Last week on Thursday the man made a phone call to a prophet – Madzibaba Emmanuel Mutumwa of Johane Masowe eChishanhu Selborne Park in Bulawayo.

The whole family gathered for a cleansing ceremony at their homestead where Madzibaba Mutumwa delivered them from their torment. The bee hive was destroyed.

In an interview, the man expressed regret at seeking an inyanga to help him make money.

“I shouldn’t have done what I did. My children and my wife suffered because of me. I regret doing what I did. If I could turn back the time I would.

But today I am happy because my family is free and I am free.

“The only way to make money is to work hard. There are no short cuts in life.

I advise people to not use juju or blood to make money. It never ends well,” he said.

Madzibaba Mutumwa said the man’s family was now free to live their lives without being haunted by the juju.

“All the glory belongs to God. This is his doing, not mine. The family must not live in fear anymore.

They are free. 2022 is the year of miracles and deliverance. I have been to Binga, Beitbridge, Lupane and Harare.

I intend to go wherever I am needed in Zimbabwe to show the power of God. Evil and suffering will not prevail,” he said.