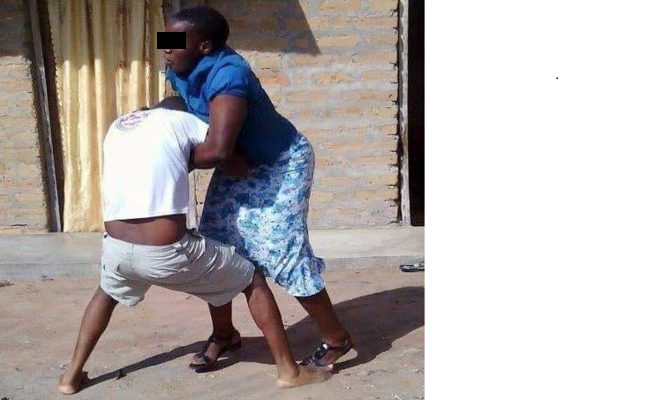 A furious mother-in-law bashed her rowdy son-in-law and grabbed him by the balls and twisted them for insulting her and her daughter.

He also called them pr0stitutes.

This was heard at the Western Commonage Civil Court when Tholakele Msimanga (59) was applying for a restraining order against her son-in-law Dumezweni Nyoni who she said has been a “headache” to her and her daughter.

Msimanga revealed that her daughter was indeed married to Nyoni but their marriage turned sour after Nyoni started to physically and verbally abuse her.

She further said efforts to patch things up in their marriage failed.

Msimanga said Nyoni would come to her home in the middle of the night from a night out and would launch verbal attacks at her while demanding to see her daughter.

But her daughter would not bow to his request as she would refuse to open the door.

The rowdy Nyoni would then bang on the door, forcing Msimanga to wake up. She would try to order him to leave, but Nyoni would stand his ground.

Due that an altercation would ensue between the pair. In one of the incidents, Msimanga said she pushed the drunk Nyoni against the wall. After that Nyoni threatened to avenge by torching her house.

He would make frequent visits to her home in the middle of the night and would repeatedly issue death threats.

Nyoni revealed that his marriage with his wife still persists and said his mother-in-law was the reason behind the wide rift in their marriage.

Nyoni stated that Msimanga does not respect her as he revealed that in one of the incidents, she grabbed his geni_tals and twisted them causing him to fall onto the ground.

She and her other daughter took turns to kick and slap him all over the body.

The matter was heard before presiding magistrate Ulukile Ndlovu.

The magistrate issued the warring parties a reciprocal order which binds them not to physically and verbally abuse each other. As part of the order, Nyoni was ordered not to visit her mother-in-law’s home.