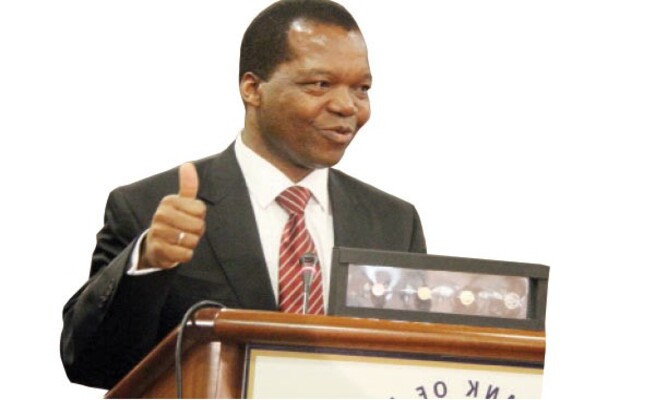 Bank notes are essentially small change and hardly used any more for shopping where mobile and plastic money now dominate as Zimbabweans get out of the cash habit, but they are needed for things like bus fares and other small transactions.

At the exchange rates set by the auctions this week, the $100 note is equivalent to about 68,5 US cents and is in fact the standard Zupco urban bus fare.

Dr Mangudya said the higher denomination was one of the ways by the RBZ to improve access to cash by the public, apart from the other benefit of improving convenience for the transacting public and businesses.

“It’s not going to cause inflation because we are not printing any new money. Individuals and businesses can only access cash based only on what they have in their bank accounts,” he said.

According to a notice gazetted on Tuesday, the $100 note will be introduced, as are all currency notes, in terms of the RBZ Act with Finance and Economic Development Minister Mthuli Ncube gazetting the notice.

The RBZ has not specified the date for the introduction of the new note.

The note will be brown in colour and follow the general front design of Zimbabwean currency with the three balancing rocks of the RBZ and with the particular note design on the back being the Great Zimbabwe monument and a boabab tree.

There are the usual security features with the visually impaired recognition feature on the front to the left, latent image showing the denomination, windowed security strip inscribed “RBZ” with colour shift from red to green.

The watermark has the highlighted inscription “RBZ” and see-through of the Zimbabwe Bird looking to the left in perfect register, as secondary features.

On the back the security features include a gold-coloured iridescent band showing the denomination of the note and see-through of the Zimbabwe Bird looking to the right.

The $100 banknote remains 156mm by 66mm as with the other denominations.

Economists said the creeping inflation had eroded the value of the local notes used for small transactions, with mobile and plastic money or bank transfers used for almost all transactions in local currency.

Even those preferring foreign currency still need something smaller than US$1 for the bus fares and similar.

Month-on-month inflation after edging up now appears to have started its decline with the month-on-month cost of living increase declining from 6,99 percent in February 2022 to 6,31 percent in March 2022.

However this March figure is still higher that March a year ago, so the annual inflation rate crept up from 66,77 percent to 72,70 percent.

Economic analyst Professor Gift Mugano said the rationale behind introducing a higher denomination banknote was the negative impact of inflation.

“The rationale behind the introduction of the $100 banknote is based on the inflationary pressures which are eroding the value of money. So the $100 note will be accommodative in that money should be convenient to the public.

“The impact of this will be insignificant in that the authorities are not printing more money but replacing the bond notes with the Zimbabwe dollar,” he said.

Presently, the highest denomination is a $50 note, which is in circulation technically alongside $20, $10, $5 and $2, although for all practical purposes the only notes readily available at the moment are the $50 and $20 notes, the three smaller denominations having now moved out of the market place.

While the intention of the monetary authorities will be to bring convenience to the transacting public, Prof Mugano said the intended objective would be rendered useless by counter-productive elements.

“I would agree with the Reserve Bank Governor when he says this inflation is driven by behavioural changes. So, as the $100 note is introduced (and) the behaviour out there in the market changes, there is a tendency of raising prices when a new note of higher denomination is introduced.

“When that happens, the intention by the authorities becomes null and void,” he said.

Prof Mugano wants the introduction of the $100 note to be the last until the economy goes into single digit inflation.

He said at the moment, monetary authorities must stabilise the gap between the official exchange rate and the parallel market.

This should be done through adopting a market-based economy where the commodity exchange becomes pivotal in the trading of commodities such as maize through an auction arrangement, said Prof Mugano.

“If we have high denominations, it will improve convenience to the transacting public. Inflation itself, has of late, been caused by the loss of value of the local currency against the US dollar given that most of the transactions in the economy are being done electronically using platforms such as EcoCash, swipe and so forth.

“We don’t expect that the introduction of a $100 note will fuel inflation. The issue at stake is for the authorities to deal with issues of money supply of which I don’t think they will print more money beyond their (quarterly) money growth target,” said Mr Chikohora.

Economist Mr Eddie Cross said the move by the RBZ was well-thought.

“Two years ago, when I was in the Reserve Bank Monetary Policy Committee, it was resolved that the central bank introduces local currency in denominations of $2, $5, $10, $50 and $100, so the introduction of the $100 note is well-thought.

“The idea is to have more currency available to the transacting public for convenience purposes and it will not cause inflationary pressures,” he said.