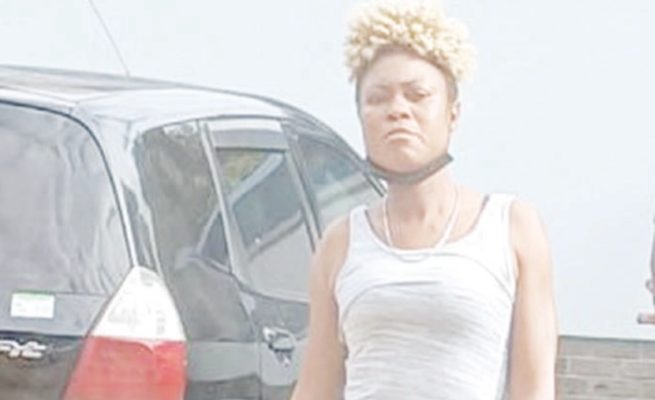 A WOMAN yesterday left men dr00ling, with some pinning their manh00ds on belts, after undr3ssed in full view of the public at the corner of Baines Avenue and Third Street in Harare.

The woman, who was only identified as Lebo, claimed she is a s33x worker and had no reason to look for a private place.

She said residents in the Avenues area of the city were familiar with her trade.

“Everyone knows that I am a s33x worker so there is no need to seek a private place to change my attire,” said Lebo.

“I commute every day from Norton for s33x work to take care of my family.

“Strangers are the ones who get surprised to see us undr3ssing, but this is what we do day and night.

“What I do not want is to see my nud_e photographs trending on social media since some of my relatives and my boyfriend do not know that I am into commercial s33x business.

Her attack on the H-Metro journalist attracted a number of motorists and pedestrians, who threatened to stone the newspaper’s car if all the images captured, were not deleted.

Lebo was taken to a police post at Fife Avenue Shops where she received counselling and was warned over disorderly conduct.

“These commercial s33x workers have become a nuisance since the relaxation of Covid-19 lockdown measures,” said a man who works in the Avenues area.

“They engage drug dealers and street kids who abuse drugs to fight in their corner whenever someone confronts them over their unacceptable behaviour.

“They have become a law unto themselves and law enforcement agencies have since stopped rounding them up.

“Visiting the Avenues area, during the day or night for medical or other business, is risky because of these women walk around while they are virtually nak3d.

“When you confront them, they are quick to accuse you of either raping them or s3_xually harassing them.

“We are appealing for a solution or deployment of police officers to clear them from this area.”