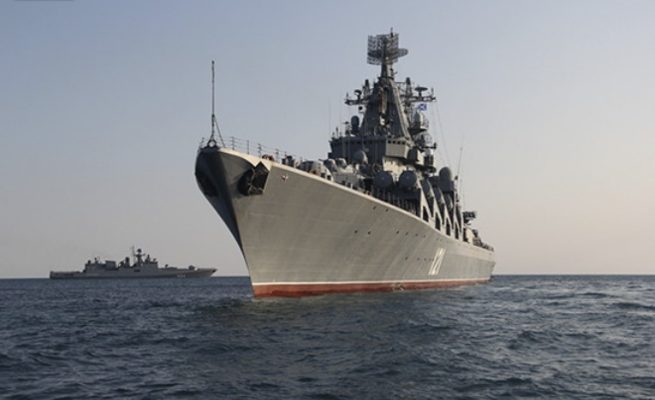 Russia’s Black Sea flagship missile cruiser, the Moskva, has sunk while being towed to a port after an explosion, the Russian defence ministry has claimed. It comes after Ukraine on Wednesday said its military struck the Moskva with Neptune anti-ship cruise missiles, while distracting its crew with an aerial drone, causing it to start sinking and forcing the crew of 500 to abandon ship.

Russia’s defence ministry initially denied reports that it had sunk and claimed the fires had been extinguished. It said four Russian ships that had gone to the Moskva’s rescue were hampered by bad weather and by ammunition blowing up on board.

Late on Thursday the ministry said in a statement: “The cruiser ship Moskva lost its stability when it was towed to the port because of the damage to the ship’s hull that it received during the fire from the detonation of ammunition. In stormy sea conditions, the ship sank.”

The claim of bad weather being a factor in the sinking was questioned by observers. Mark Hertling, the former commanding general of the United States Army Europe, told CNN: “As they were towing that ship in, that very wounded ship, into Sevastopol, they claim a storm sank it. Looking at the weather report outside of Sevastopol today the winds were about four miles an hour with 40 degree [4C] temperatures and a little bit of rain.”

The apparent attack on and sinking of the Black Sea fleet’s flagship – 50 days after Vladimir Putin launched his invasion of Ukraine – represents a symbolic blow to the Kremlin. The Moskva was the pride of its fleet and the most prestigious vessel involved in the war against Ukraine.

“The sinking of the Moskva, the flagship of the Black Sea Fleet, is not just a significant loss, it is emblematic of the shambolic Russian military campaign,” said Michael Kofman, research programme director and Russia expert at the US government-funded Center for Naval Analyses.

Confirmation of the sinking came as the CIA’s director, William Burns, warned that Vladimir Putin may resort to using a tactical or low-yield nuclear weapon in light of his country’s military setbacks.

During a speech in Atlanta, Burns said: “Given the potential desperation of President Putin and the Russian leadership … none of us can take lightly the threat posed by a potential resort to tactical nuclear weapons or low-yield nuclear weapons.”

The Kremlin placed Russian nuclear forces on high alert shortly after beginning the war on 24 February, and furthered its nuclear rhetoric on Thursday when it said it would be forced to strengthen its defences in the Baltic if Finland and Sweden join Nato, including by deploying nuclear weapons.

Burns, however, said the US had not seen “a lot of practical evidence” of actual deployments that would cause more worry.

Ukraine’s president, Volodymyr Zelenskiy, has delivered an address to mark the 50th day of war, calling Russia’s invasion “absurd” and “suicidal” and saying Ukraine had become a “hero for the whole free world”.

“We have withstood 50 days already … although the occupiers gave us a maximum of five,” he said. “I remember the first day. Everyone sympathised. Many of them advised me to flee the country. Advised to actually surrender to tyranny. But they didn’t know us either. And they did not know how brave Ukrainians are.”

In signs of the financial pressures being placed on Russia by the sanctions regime, which has led to rating agency Moody’s saying that Russia “may be considered in default” if it fails to pay bonds in US dollars by 4 May, Moscow has written to Brazil asking for its support in the International Monetary Fund, the World Bank and the G20 group of top economies.

A Brazilian economy minister spokesperson indicated that Brazil would like Russia to remain part of discussions at multilateral organisations.

The sinking of the Moskva, meanwhile, dealt a blow to one of Russia’s main campaign objectives. Commissioned in 1983, it was armed with 16 anti-ship Vulkan cruise missiles with a range of at least 440 miles (700km). According to reports, it was also carrying S-300 anti-air missiles, which are crucial to Russia’s air power over Crimea and Ukraine’s Kherson province, now occupied by Russian troops.

It is the most significant naval vessel to be sunk since the Argentinian cruiser General Belgrano was torpedoed by a British submarine, HMS Conqueror, in 1982. It is the first time Moscow has lost a cruiser since German planes sank the Chervona Ukraina (Red Ukraine) in 1941 at Sevastopol – the same Crimean naval base to which the Moskva was supposedly being towed when it sank.

Maksym Marchenko, the Ukrainian governor of the region around Odesa, said the Moskva had been hit by two cruise missiles. “Neptune missiles guarding the Black Sea caused very serious damage,” he said.

Oleksandr Turchynov, a former secretary of the national security and defence council, said Ukraine had hit another Russian ship two weeks ago with a Neptune cruise missile. He said the missile inflicted “significant damage” on the Admiral Essen, “removing it from combat operation”.

Western officials described the Ukrainian claims to have hit the Moskva with anti-ship missiles as “credible”. A senior US defence official noted that five other Russian vessels that had been as close as or closer to the Ukrainian coast than the Moskva had moved at least another 20 nautical miles offshore after the explosion, suggesting an effort to get out of range of Ukrainian missiles.

“In the wake of the damage that the Moskva experienced, all of the northern Black Sea ships have now moved out, away from the northern areas they were operating in,” the defence official said.

The Moskva gained notoriety early in the war when the crew demanded the surrender of Ukrainian forces on Snake Island, prompting a riposte by radio from one of the border guards on the island: “Russian warship, go fuck yourself.”

The phrase instantly became synonymous with Ukrainian defiance, and is now a universal meme. The day before the Moskva was sunk, Zelenskiy unveiled a new postage stamp portraying the ship and the Ukrainian border guard with his middle finger raised.

The Moskva had been leading a substantial Russian naval presence in the Black Sea, threatening Ukraine’s southern coast and its key ports. This has been one of the main focuses of the Kremlin’s military efforts, and is aimed at cutting off Ukraine’s access to sea and creating a land bridge from the Crimean peninsula to the Russian border.

The Neptune missile that is claimed to have punched a hole in the Moskva’s hull was developed and upgraded by Ukraine from a Soviet missile design. It is fired from a mobile launcher with a range of 100km, allowing it to be fired from some distance inland.

Ukraine is reported to have a limited supply of the missiles and has appealed for western supplies of anti-ship weapons. The UK prime minister, Boris Johnson, promised on a recent visit to Kyiv that British missiles would be made available, but they have not yet arrived.

On Wednesday, Joe Biden approved another $800m in US military assistance to Ukraine, for a total of $2.6bn since the beginning of the war. The new tranche will include longer-range air defence systems than had been previously supplied to Ukraine.