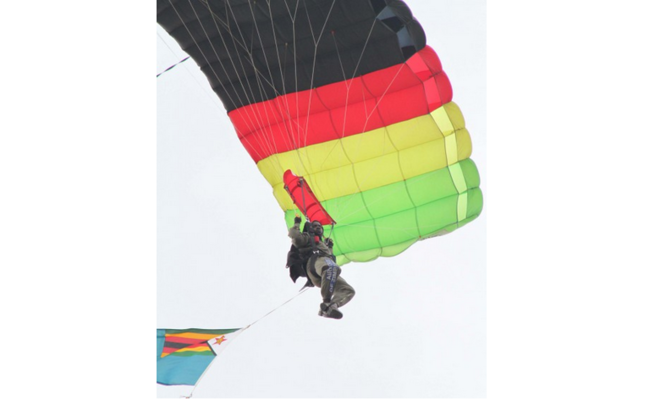 An Airforce of Zimbabwe (AFZ) paratrooper was, Thursday, reportedly rushed to the hospital after a landing mishap while conducting drills at Barbourfields Stadium in Bulawayo.

Members of the Zimbabwe Defence Forces have been going through their paces in preparations for the 42nd Independence Day celebrations which will be held in the country’s second-largest city for the first time since 1980.

The national event which will be graced by President Emmerson Mnangagwa will be held on Monday under the theme, “Zim@42 – Leaving No One and No Place behind”.

The accident, according to eyewitnesses happened in the morning around 10 am.

“There has been a hive of activity at Barbourfields stadium in preparation for the independence day celebrations, the army and other security organs have been doing drills. Unfortunately, one of the paratroopers fell while attempting to land,” said one source.

“We saw some medics rushing to the scene to offer assistance to the paratrooper. An ambulance was later summoned and took the injured officer to the hospital.”

In 2017 another free faller failed to land properly and crashed into the crowd at the National Sports Stadium in Harare during the Zimbabwe Defence Forces day celebrations.

ZDF spokesperson Colonel Alphios Makotore’s mobile phone was not reachable when sought for a comment.

This story will be updated once we get more details.