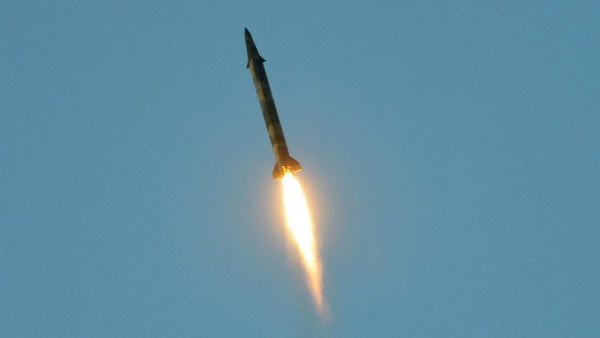 Vladimir Putin did his best to put a menacing spin on Russia’s testing of a new intercontinental ballistic missile on Wednesday.

The Russian President said the successful launch of the “Sarmat” ICBM — nicknamed the “Satan II” in the West and capable of delivering multiple nuclear warheads as far as the continental United States — would “give thought to those who are trying to threaten Russia.”

But Western experts portrayed the test as “nuclear saber-rattling,” saying the threat to the US or its allies was “extremely low” and suggesting Putin’s real motivation was to distract his domestic audience from Russia’s recent military failures, such as the sinking of its Black Sea flagship the Moskva.

The Russian Defense Ministry said Wednesday it had test-fired the Sarmat from a silo launcher at the Plesetsk State Test Cosmodrome in the Arkhangelsk region of northern Russia toward the Kura test site on the Kamchatka Peninsula in Russia’s far east.

The launch was the most extensive yet for a missile that was first tested in December 2017 and was promptly lauded by Putin in a statement published by the state-run TASS news agency.

It is not the first time Putin has boasted of the missile’s potency. He mentioned the Sarmat in a 2018 speech as being among a host of new weaponry he said would render NATO defenses “completely useless.”

But US officials played down his remarks back in 2018 and took a similar view after the latest test. They noted that Moscow had informed Washington ahead of Wednesday’s test, as required under international agreements, and said the US had tracked the launch.

“Such testing is routine, and it was not a surprise. It was not deemed be a threat to the United States or its allies,” Pentagon spokesman John Kirby said.

Putin was engaging in “nuclear saber-rattling,” former CIA chief of Russia operations Steve Hall told CNN’s Kate Bolduan, and the probability of any strike on the US was extremely low.

“Satan” gets a facelift

Rather than an immediate threat to the West, the launch should be seen as an incremental step in Russia’s ICBM program, analysts said.

The Sarmat, when operational, will be a one-for-one replacement for the Soviet-era Voevoda ICBMs, known by the NATO designation SS-18 Satan, they said.

Hans Kristensen, director of the Nuclear Information Project at the Federation of American Scientists, said developing the liquid-fueled Sarmat was like giving “a facelift” to the original Satan missile.

It had “similar capabilities to the existing SS-18,” but there were “probably some enhancements under the hood” too, Kristensen said.

Like the SS-18, the Sarmat could carry 10 and possibly more independently targeted nuclear warheads with a range of up to 18,000 kilometers (11,185 miles), according to the Missile Defense Project at the Center for Strategic and International Studies. That is far enough to reach the continental US.

It could also carry a hypersonic glide vehicle to deliver those warheads, a CSIS fact sheet says.

Kristensen said for the past year or so Russia has been upgrading silos to handle the Sarmat.

He also said the Sarmat program had suffered several delays. The CSIS said it was scheduled for deployment last year.

When operational, the Sarmat — like all silo-based missiles — is likely to be kept on a higher alert status than ICBMs on mobile launch platforms, Kristensen said. This is because silos are stationary and therefore more vulnerable to an enemy strike.

A distraction from Moskva’s sinking

The launch should also be seen in light of Russia’s recent military failures, and was likely being used by Putin as a distraction for his domestic audience, analysts said.

From the Russian perspective, the war in Ukraine has not been going well. A conflict Moscow originally envisioned as likely to be over within days has now stretched well into its second month, with Russian efforts stalled by a determined and highly-skilled Ukrainian resistance, as well as mundane problems, like a lack of trucks, substandard logistics and a reliance on poorly trained conscripts.

And just last week, Russia lost one of its most visible military assets when the guided-missile cruiser Moskva sank in the Black Sea. The loss of the ship was an embarrassment to Moscow, which admitted the vessel had suffered a catastrophic fire but did not confirm Ukrainian claims that it had been hit by anti-ship missiles.

Such high-profile failures have left Putin in dire need of some positive military news to feed audiences back home and Wednesday’s launch provided that.

At the same time, experts say Russia’s obsession with showcase weapons such as the Satan II hides deeper, more basic problems at the heart of its military.

“Often glamorous dictator militaries are good at the showy weapons, they buy the fancy aircraft and the fancy tanks, but they don’t actually buy the less glamorous stuff,” said Phillips O’Brien, professor of strategic studies at the University of St Andrews in Scotland, in an interview with CNN earlier this month.

After Wednesday’s launch, he reiterated that point on Twitter, saying that “so much of this reeks of Hitler’s ‘wonder weapons’ of World War II.”

The wonder weapons were “German propaganda to make it look like Germany had a chance of winning the war when things were going very badly. These weapons often existed … but their impact was used to distract the German people.”

O’Brien said Putin had used “very Hitlerian rhetoric when boasting about the Sarmat being the best system in the world”.

“[He’s] trying to make the Russians confident and proud in their technological prowess, when the war is highlighting constant shortcomings with the Russian military’s ability to operate complex systems,” O’Brien said.

But as far as the situation on the ground in Ukraine goes, analysts said, the ICBM test would have no practical effect.

It’s a strategic weapon, essentially designed to hit the United States as was the SS-18, its Cold War predecessor.

And even then, Putin’s menacing words should be seen in a wider context.
Like Russia, the United States has its own ICBMs — as well as ballistic missile submarines and nuclear-capable strategic bombers — that would prove a strong deterrent for Putin to ever use his “Satan II.”

Kirby, the Pentagon spokesman, has previously told “Fox News Sunday” that Washington is confident of its own ballistic missile capabilities.

However, unlike Russia, the US has made efforts to avoid inflaming tensions with its own missile programs. Earlier this month the US Air Force canceled a scheduled test of its Minuteman III ICBM for this very reason.

“I think there was a prudent decision at the time to take a knee on that and to not launch it, where we were in space and time in the early goings on with respect to this invasion, it was the right thing to do,” Kirby said.