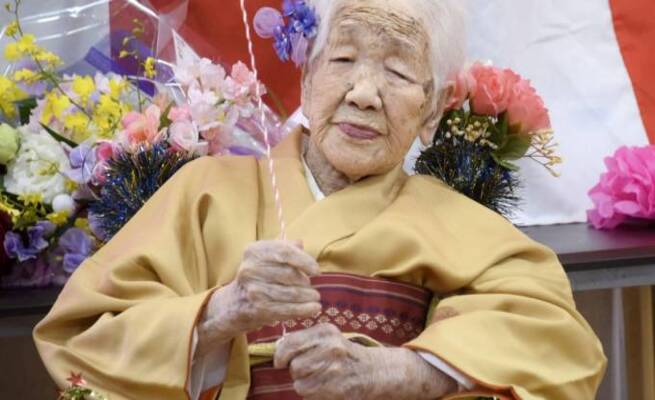 Tanaka was born on January 2, 1903 and was confirmed by Guinness World Records in 2019 as the oldest living person.

She died of old age at a hospital in Fukuoka city, western Japan, on Tuesday April 19 it has been confirmed by Japan’s state broadcaster.

During her life, she had been partial to chocolate and fizzy drinks, NHK said.

Japan has a dwindling and rapidly ageing population.

As of last September, the country had 86,510 centenarians, and nine out of every 10 were women.

Despite her age, she typically woke up at 6am and was still learning, often studying subjects like maths during her afternoons.

She also loved playing the classic board game Othello and had become an expert at the game, often beating nursing home staff.

She was confirmed as the oldest person alive on January 30, 2019, (when she was 116 years 28 days) with her loved ones and the mayor present for the occasion.

When the Guinness World Records recognised her as the oldest person alive in 2019, she was asked what moment she was the happiest in life.

She was the seventh child of Kumakichi and Kuma Ota, had married Hideo Tanaka on January 6, 1922, four days after turning 19.

The couple went on to have four children and adopted a fifth.

She had planned to use a wheelchair to take part in the torch relay for the Tokyo Olympics in 2021, but the pandemic prevented her from doing so.

During her life, she suffered from a number of health issues, and had several operations, including surgeries for cataracts and colorectal cancer, but lived ‘peacefully’ in her final years.