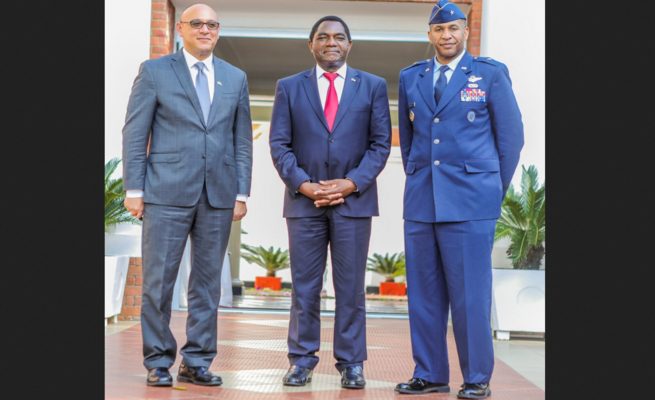 Investigations have revealed how President Hakainde Hichilema was forced to agree to set up the controversial AFRICOM office in Lusaka by the Brenthurst Foundation.

Highly placed diplomatic sources have revealed that President Hichilema had to agree to the AFRICOM proposal after persuasion from the Brenthurst Foundation.

The two-day meeting dubbed African Security Dialogue was attended by US Embassy Defence Attaché Tom Stibral and discussed ways to improve security and stability across Africa.

Others who attended the meeting were Ivor Ichikowitz, a well known arms dealer and head of the Paramount Group with strong links to African Presidents such as Ali Bongo, Denis Sassou-Nguesso and Cyril Ramaphosa.

The Brenthurst Foundation is based in Johannesburg, South Africa and was established in 2005 by the Oppenheimers, the wealthy South African family with strong links to Anglo American Corporation.

The Oppenheimers, through Brenthurst Fiundation, has been financing the operations of the UPND since its formation in 1998 by late Anderson Mazoka, a former Anglo American senior Executive.

In late March, President Hichilema attended a secret meeting organized by the Brenthurst Foundation at Lower Zambezi Lodge at which it was agreed that the AFRICOM Cooperation desk be set up in Lusaka.

The high level meeting was not publicized and President Hichilema’s Media Team did not disclose the whereabouts of the Head of State between March 27th and March 29th 2022, the period in which the meeting took place.

The meeting agreed that Zambia should host AFRICOM and act as a strategic hub for US military operations in the region.

At the meeting, President Hichilema was only accompanied by his Senior Private Secretary Bradford Machila and State House intern Chipo Mwanawasa and addressed the gathering on the importance of investing in security.

The meeting was convened by Brenthurst Foundation CEO Greg Mills and facilitated by Almquist Knopf who served as Director of the Africa Centre for Strategic Studies, an academic institution with the US Department of Defence.

Ms. Knopf was until late last year heading the Department which was established by the US Congress for the study of security issues relating to Africa.

Another key person who attended the meeting was Prof. Serge Tshibangu, a special envoy of President of the DRC Felix Tshisekedi.

Last week, President Tshisekedi was in Zambia for a two day special visit and signed a raft of agreements with Zambia including one of defence and security operation and the Zambia – DRC Cooperation Agreement on the Establishment of the Value Chain in the Electric Battery and Clean Energy.

Zambia and the DRC have the world’s mineral reserves for Cobalt, a key ingredient in the production of batteries for electric vehicles.

The meeting was hosted by Tristan Pascal, the new CEO for First Quantum Minerals, the owners of Lower Zambezi Lodge and a friend of Brenthurst Foundation with business interests in the DRC.

Others who attended the meeting were Retired General Vusi Masando from South Africa, Lieutenant General Jonah Mwandi from the Kenya Defence Force and John Githongo, a former anti corruption advocate from Kenya who now works with the Brenthurst Foundation.

Although presidential officials and security experts from South Africa, Rwanda, DRC, Kenya and Zambia itself attended the secret meeting where security aspects regarding Southern Africa and the whole continent at large were discussed, surprisingly Zambia’s neighbour, Zimbabwe was neither represented nor invited.

This is one of the reasons why president Emmerson Mnangagwa’s government is strongly worried about the setup of an American military base in Zambia just 12 months before Zimbabwe holds its 2023 presidential elections.