In a rather tragic development, two people died last night at Borrowdale Race Course in a stampede that ensued Winky D’s musical performance at the Castle Tankard.

The tragic incident reportedly happened while party-goers were making their way out of the Race Course through an exit point.

Police have since identified the victims as Thomas Maarira (43), and Emilia Makoga (44).

We publish the Police statement in its entirety below;

The Zimbabwe Republic Police is investigating the sad and unfortunate death of two people at Borrowdale Race Course on 7th May 2022 at 2205 hours due to a stampede after the Castle Tankard musical performance by Winky D.

The stampede victims have been identified as,

The regrettable incident occurred while the public was on its way out of the Race Course through an inside exit point.

The Police express condolences to the bereaved families and assures the public that inquiries are in progress.

The Zimbabwe Republic Police will continue to engage organizers of big social gatherings especially entertainment activities to ensure that a limited number of people is allowed access during musical performances.

More details will be provided in due course.” 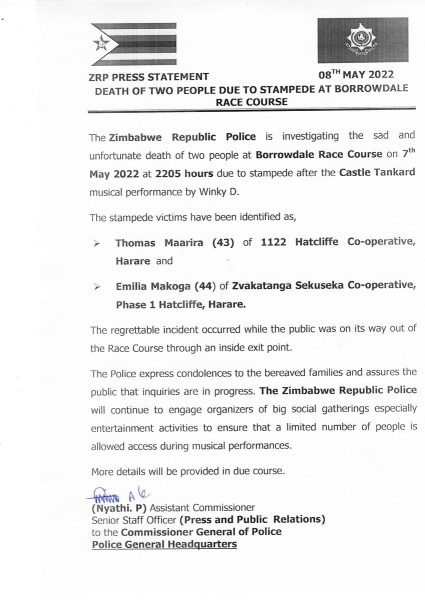 Four members of the Zimbabwe Republic Police reportedly invaded the stage whilst Winky D was performing his fourth song forcing the show to end abruptly.

This angered fans who started throwing cans and bottles.

It is still not clear why the police stormed the stage and stopped the show. However, some critics have already started to assume that they were enforcing curfew regulations while some think that the move to stop Winky D’s performance was politically motivated.