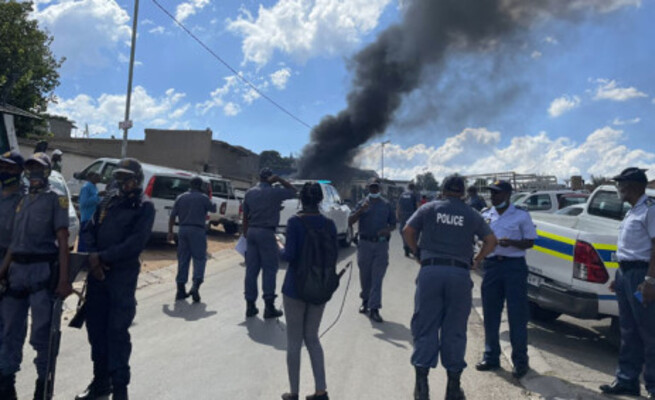 The seven men charged with murder in connection with the murder of Zimbabwean national, Elvis Nyathi, in Diepsloot, will today know if the Randburg Magistrate’s Court will release them on bail.

Nyathi was beaten and burnt to death in the volatile Diepsloot last month.

The attack on Nyathi came after vigilante groups in Diepsloot led protests for several days and targeted foreign nationals accusing them of committing crimes in the area. The groups went around demanding identity documents from residents and allegedly taking bribes from people who could not produce the documents.

Nyathi, a father of four children in Zimbabwe, fled from the crowd but he was pursued and severely assaulted in front of his wife Nomsa Tshuma, 38.

The accused men, who are all South African, have been charged with murder, robbery with aggravating circumstances, kidnapping, attempted murder, assault with intent to cause grievous bodily harm and extortion.

The seven men have been charged with serious, schedule-six offences, which means the onus will be on them to convince the Randburg Magistrate’s Court that exceptional circumstances exist which warrant their release on bail.

National Prosecuting Authority spokesperson Phindi Mjonondwane said the men allegedly robbed some of the victims of their belongings and demanded money in exchange for the release of those in captivity.

“It is deeply disturbing how the recent incidents of anti-foreigner sentiment in parts of the country echo our apartheid past. We have seen people being stopped on the street by private citizens and being forced to produce identification to verify their immigration status. We have seen some political leaders making unscientific statements about immigrants to exploit people’s grievances for political gain,” said Ramaphosa in his weekly newsletter.

“The events in the Gauteng township of Diepsloot last week were a tragedy. In the course of a single weekend, seven people were killed, sparking protests. This loss of life is deplorable, as is the killing of a fellow African from Zimbabwe allegedly at the hands of vigilantes. Crime is a serious problem in this country.”