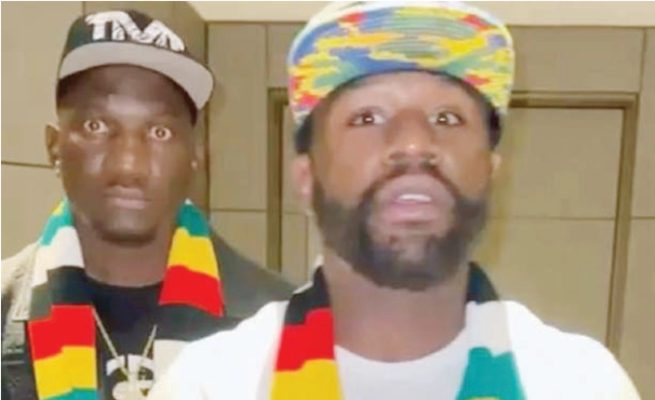 BUSINESSMAN Pedzisai “Scott” Sakupwanya met American iconic boxer and promoter, Floyd Mayweather Jnr, on Saturday evening in Dubai. Mayweather, who is considered to be the world’s best pound-for-pound boxer in history, went on to appoint Scott as the brand ambassador for his The Money Team (TMT) lifestyle brand.

Soon after the appointment, the wealthy Mayweather went on to pen his signature on the scarf that has become one of President Mnangagwa’s trademarks.

Mayweather promised to come to Zimbabwe in a video with Scott who he described as his close friend.

In an interview yesterday, Scott, who is in Dubai for private business, said his meeting with Mayweather was a game-changer.

“I met my brother Floyd Mayweather on Saturday evening and we had very fruitful exchanges.

“As you may know, Mayweather was in Dubai for his exhibition bout against Don Moore.

“The fight was supposed to take place on the Burj Al Arab Hotel helipad and only about 40 guests were to attend the match in person.

“Mayweather had invited me to the bout but it was postponed following the death of the President of United Arab Emirates Sheik Khalifa bin Zayed Al Nahyan.

“After this, Mayweather extended the invitation again. If all goes well, the bout will be staged this coming Saturday and I will be in attendance as Mayweather’s guest,” said Scott.

Scott, who heads Better Brands Holdings, said after exchanging a few notes, Mayweather then appointed him as the brand ambassador for his TMT brand in Africa.

“This is a game-changer,” he said.

“From now onwards, anyone in Africa who wants to officially deal with TMT will have to pass through me.

“I am honoured because we all know how big TMT is as a brand.

“Mayweather has defied odds in boxing and business. He is a legend,” said Scott.

Mayweather ended his professional career undefeated and with a record of 50 victories.

“To seal off the fruitful meeting, I then handed Mayweather the Zimbabwean scarf that has been made popular by His Excellency President Emmerson Mnangagwa.

“He duly signed the scarf and what a way to honour our President.

“As you know, I am from humble beginnings. I started off as a struggling gardener but President Mnangagwa empowered me to be where I am.

“I am now winning and dining with legends like Mayweather. This shows that with God nothing is impossible.

“During the first quarter of this year, I have already delivered about 7,5 tonnes of gold to Fidelity Printers.

“This means that single-handedly, I have delivered about 90 percent of the gold which Fidelity Printers got.

“I am expecting to deliver more in the second quarter.

“All this is being made possible by President Mnangagwa who values the empowerment of youths.

“I want to urge the youths in Zimbabwe to rally behind President Mnangagwa because he walks the talk in terms of youth empowerment.

“He has created a conducive environment for youths to dream big and make it big,” said Scott.

He added that he would discuss more business deals with Mayweather during their next meeting.

“Now that we have created this rapport with my brother Mayweather, I am going to see what other possibilities are there during our next meeting,” said Scott.

Scott also met Don Moore, who is set to fight Mayweather in the exhibition bout.