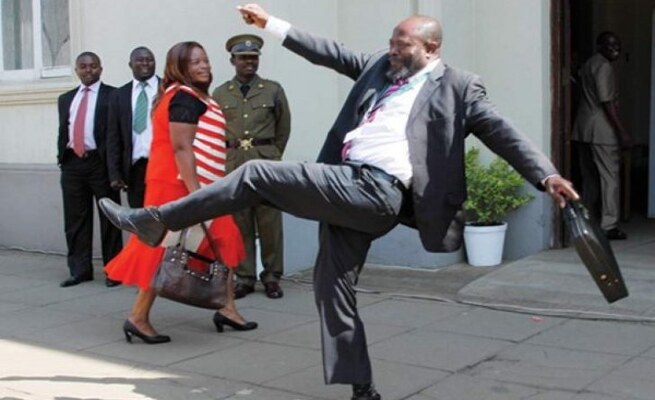 The protest, which had been planned to take place at the party’s Buhera district offices at Murambinda growth point, failed to materialise as police cordoned off the area.

Zanu PF supporters are baying for Chinotimba’s blood after a leaked video circulated on social media platforms, in which the vocal MP told party supporters in Muchini village, ward 29 in Buhera South that Mnangagwa was plotting to remove him from Parliament and ensure he does not retain his seat in 2023.

“I have put electricity in most areas in my constituency and I have not stopped … now Mnangagwa wants to send his people to remove me. This country was fought for by war veterans,” Chinotimba was heard saying.

This courted the ire of Zanu PF youth group, the Zimbabwe Revolutionary and Patriotic Youth Network, which wrote a letter on Monday demanding an explanation from Chinotimba, whom they accused of undermining Mnangagwa.

Yesterday, there was heavy police presence in Buhera in anticipation of the demonstration against the outspoken legislator.

There were reports that Zanu PF Manicaland provincial leadership led by Mike Madiro ordered the police to block the demonstration. Madiro yesterday said: “I don’t want to comment on that, you can write what you want.”

Manicaland police spokesperson Inspector Nobert Muzondo said he was not aware of the demonstration.