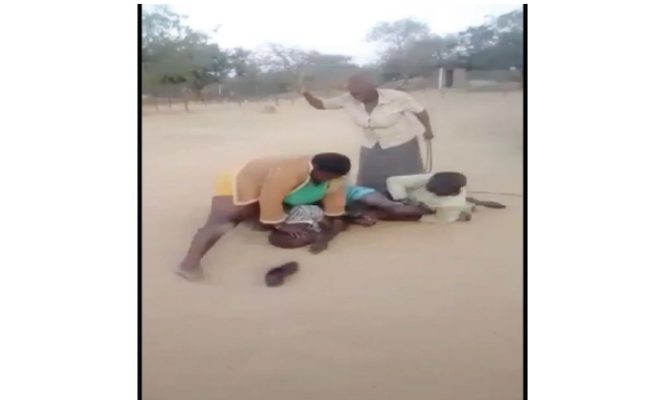 A 70-year-old man from Kezi under Chief Malaba Ncube will think twice before he commits adul_tery again after his wife and grandchildren ganged up to beat him and left him unconscious.

Andrew Duba Ndlovu was manhandled and pinned to the ground by his grandchildren, Babili Ndlovu and Mqondisi Ndlovu before his wife, Siphiwe Ndlovu, took a knobkerrie and thrashed him repeatedly on the back and butt0cks with neighbours recording the incident.

Babili Ndlovu, the granddaughter refused to be left out as she unleashed a rain of slaps on her grandfather while encouraging her grandmother not to stop the knobkerrie attack — “tshaya gogo,” she kept saying as Andrew Duba Ndlovu begged for mercy.

Duba is accused of not only cheating but of spending lavishly on his girlfriend.

Siphiwe Ndlovu told B-Metro that her husband now neglects her and she was left with no choice but to assault him.

“We rely on that money to buy everything at home, but now he takes it away to give his new wife, that made me angry at him,” said Siphiwe Ndlovu.

Chief Malaba could not confirm the incident as he had not received a report.

“I heard that there was a man who was beaten by his wife but the matter did not reach me quite clearly, so if they appeared before the headman, it means he managed to solve the matter,’’ said Malaba.

The trio appeared before headman Mpande Ndlovu, where the community agreed to expel the grandchildren from home.