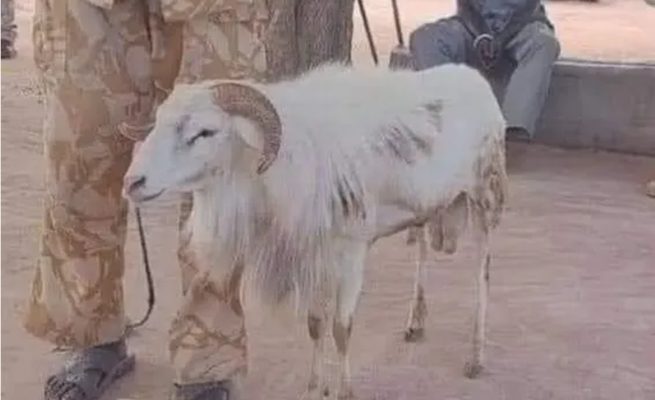 In a bizarre case, a sheep in South Sudan has been sentenced to jail for three years after it was found guilty of killing a woman.

According to Sudan’s Eye Radio, the ram was taken into police custody in South Sudan earlier this month after it attacked 45-year-old Adhieu Chaping. The ram had headbutted Ms Chaping repeatedly, breaking her ribs. The 45-year-old died immediately because of her injuries.

Back then, the police had informed that the incident took place in Rumbek East in a place called Akuel Yol. The ram was apprehended and taken into custody at a Police Station in Maleng Agok Payam.

Speaking to the media outlet, Major Elijah Mabor explained, “The owner is innocent and the ram is the one that perpetrated the crime so it deserves to be arrested then later on the case shall be forwarded to customary court where the case can be handled amicably.”

Now, citing local media reports, Ladbible reported that the ram will be spending the next three years in a military camp in Aduel County headquarters in Sudan’s Lakes State. The local court has ruled that the owner of the ram, Duony Manyang Dhal, will also have to hand over five cows to the victim’s family.

Moreover, Mr Dhal will also most likely lose the ram at the end of its sentence as customary laws in the region state that any domestic animal that kills a person is then given as compensation to the victim’s family.

Ladbible reported that county administrator Paul Adhong Majak informed that the ram’s owner and the victim’s family are related and neighbours. Both the families have signed the contract to formalise the agreement with the police and community leaders acting as witnesses.

Meanwhile, this is not the first time a person has been killed by a sheep. Last year, a woman in the United States also died after being attacked by a sheep at a farm. As per the media outlet, 73-year-old Kim Taylor was working as a volunteer at the Cultivate Care Farms in Bolton, Massachusetts, when she was badly injured by the animal. She went into cardiac arrest shortly after the emergency services arrived at the location.