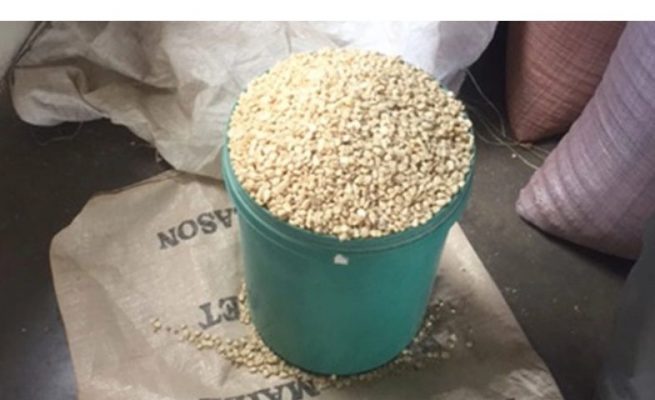 MILLIONS of Zimbabweans will go hungry as the country faces a severe grain shortage.

A poor rainfall season and hoarding of maize by farmers demanding payment in United States dollars have exacerbated an already dire situation.

Information at hand indicates that the Grain Marketing Board (GMB), the custodian of the country’s grain reserves, was last Friday forced to indefinitely suspend grain allocations to millers for unclear reasons.

But players in the market told NewsDay that they have it on good authority that the country’s grain stocks are running out and government could be forced to raise grain producer prices to persuade farmers to deliver their grain to GMB depots.

Some farmers in the country have been hoarding grain, while others are selling it on the black market for US dollars.

Zimbabwe’s maize producer price went up by 50% to $75 000 per tonne and government said it would be paying 30% in US dollars and the rest in local currency.

Farmers immediately demanded a 50% US dollar payment for their grain.

Players in the grain industry yesterday told NewsDay that GMB slashed maize allocations to millers from 100% to 75% in February, and further cut them to 50% last month.

“We have gone for more than six weeks without an allocation. We are getting supplies every four weeks,” a miller, who preferred not to be named, said.

“We used to apply and get allocations each month, then submit returns around mid-month. We started getting 75% three months ago, then last month, it went down to 50%. On Friday last week, we had made payments and waited for allocations, but everything just stopped.

“They didn’t give us any reasons, but we are told by people at GMB that they want to increase the maize producer price in order to attract deliveries because the $75 000 is now very low. We are also told stocks are running out and it’s obviously true and that’s why they allowed us to import freely,” the miller said.

Major millers have since confirmed that GMB abruptly suspended allocations on Friday without giving any reasons.

“Things were normal and I can confirm the allocations were just stopped and we don’t really know why. I wouldn’t want to lie, but we can only speculate,” a top executive with one of the country’s major millers said yesterday.

“The question for us major millers is that we move huge volumes and our shareholders will be worried about this scenario, where you import maize in US dollars and then you don’t know if you are allowed to sell in US dollars to recover your money without having to then go to the black market and risk huge exchange rate losses. It would be better if they allowed us to go on the auction like what oil expressers are doing,” added another senior official with a top milling firm.

Farmers said maize production in the just-ended season was largely below average across the country.

As a result, government swiftly moved in to mitigate hunger by opening the borders for registered millers to import maize using free funds.

Recently, the Grain Millers Association of Zimbabwe indicated that private players in the industry had been given the greenlight by government to import 400 000 tonnes of maize worth US$100 million this year using free funds.

Use of free funds is expected to see maize and maize meal prices skyrocketing given that some players have no access to affordable foreign currency on the government auction platform.

There are now fears that a majority of Zimbabweans, who earn below the poverty datum line of $120 000 for a family of six, might not be able to afford the staple mealie-meal.

As farmers hoard grain, government has resorted to using police and the army to stop grain side marketing, with all impounded maize sent to GMB silos.

Zimbabwe requires 2,2 million tonnes of maize annually, 1,8 million of which are for human consumption and the balance for stockfeeds.

Efforts to get an official comment from GMB were fruitless, and it had not responded to NewsDay’s questions at the time of going to print.

“I was in a meeting and I saw your questions just now. Let me get back to you,” GMB spokesperson Joseph Katete said.

Later, his mobile phone was unreachable.

Attempts to get an official comment from Lands and Agriculture minister Anxious Masuka and his deputy Vangelis Haritatos were also fruitless.

Since the turn of the new millennium, Zimbabwe has endured one economic crisis or another, the apex of which was a 500 billion percent inflation in December of 2008, according to World Bank data, which destroyed savings and rendered the local currency useless.

Another and equally devastating consequence was the closure of a record 5 600 firms between 2011 and 2013, which left 55 000 employees jobless. Around 10 firms were plunging into bankruptcy weekly, shading off an average of 300 formal jobs, according to reports from that time.

The dollarisation period of between 2009 and 2013 stabilised the economy somewhat, and the job letting eased because of currency stability and because consumer demand improved as well.

However, the return of the Zimdollar in 2019 has brought back familiar failings to the fore again and problems that confront the southern African country today stem from government’s decision to prematurely return the local currency before meeting several benchmarks, such as building three months import cover and improving exports.

Today, the same conditions that prevailed during the job bloodbath era have returned, and firms have been pushed to the brink.

Prices are rocketing daily, inflation has been rioting lately and the exchange rate crisis has spiralled out of control, eroding workers earnings at a frightening rate.

In the past five months, the value of earnings has fallen by about 40% and in addition, workers after receiving their Zimbabwe dollar salaries, have to buy United States dollars from the black market to fund their daily requirements such as transport, fuel, some groceries, rentals, school fees, among others.