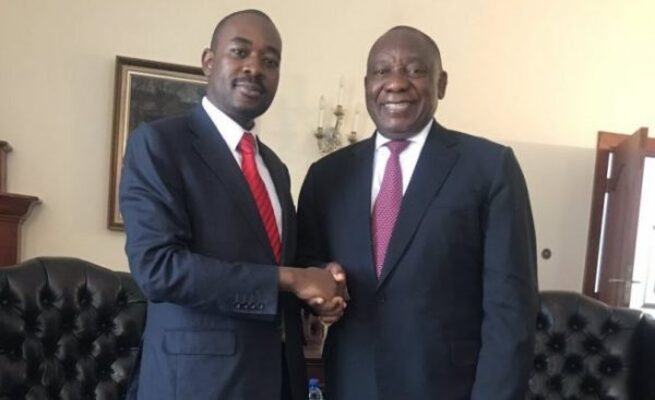 In a series of tweets, Chamisa said his party will also introduce policies to help enforce the rule of law.

His party, formed early this year, has been accused of operating without policies and structures.

“The citizens government will come up with a policy framework and turnaround strategy, which among others includes the following, develop demand driven policies informed by inclusive policies and inclusive politics anchored upon an inclusive dialogue with all political actors, economic players, labour, business, civil society and academia with a view to build a new consensus buy-in,” Chamisa tweeted.

“Our policies will be predictable, consistent and guarantee certainty — this will help citizens, economic agents, workers, business and investors to plan with certainty.

“The corrupt will be an endangered species & extinct. We will eliminate corruption, enforce rule of law, foster political tolerance, constitutionalism and respect of property rights, which, combined, are critical ingredients required to attract investment, savings and production,” he said.

On the country’s US$17 billion external debt crisis, Chamisa said his policy stance would be to engage multilateral communities and open Zimbabwe to the world.

“We will make Zimbabwe an entrepreneurial society – new industries, new factories and new companies and new sectors and employing more. We will embark on radical central bank reforms on the back of wide consultation with bankers, business and labour. We will start with full dollarisation and then create a conducive environment and the right confidence levels for the adoption of our local currency,” he said.

On the de-dollarisation roadmap, the opposition leader said the CCC will ensure fiscal consolidation of the current account surplus, and provide six months import cover to ensure that foreign currency reserves are stable and achieve single digit inflation, and a productive competitive economy.

He said parents have assumed the role of the government because they are paying underpaid teachers incentives, while pensioners have been reduced to beggars.

On corruption, Chamisa said it has reached alarming levels with COVID-19 funds having been squandered by government officials.

“Likewise, the education system is in the graveyard. Parents have assumed the role of government by paying teachers incentives with a view to arrest the situation. War veterans and pensioners have been reduced to beggars.”

Political and economic analysts said it was good for the opposition to come up with alternative policies.

Political analyst Alexander Rusero said: “Alternative policies and reforms are always good if we want to improve the economy. He (Chamisa) has the vision, but we hope that he can walk the talk. Politicians have a system that when they are in power, they will forget their promises and we the people will remain stagnant.”

Economist Prosper Chitambara said: “It is also good to re-dollarise and boost our economy as you are aware that inflation has been affecting our currency. So re-dollarisation is a good policy stance.”

Chamisa also bemoaned the state of the country’s hospitals saying they were now death houses with preg_nant women being forced to bring their own consumables.

And in a statement yesterday, which highlighted the CCC alternative health policy approach, CCC spokesperson Fadzayi Mahere said her party will recognise health as a critical sector and ensure 15% funding of health from the national budget as stipulated by the Abuja Declaration.

She said the per capita health allocation will significantly be increased.

“Doctors, nurses and all health workers will be paid decent salaries and benefits commensurate with their important contribution to the attainment of the right to health. We recognise that a motivated, well-resourced medical workforce is crucial to the attainment of our goals,” she said.

Mahere said the CCC will invest in upgrading the country’s health infrastructure, equipment and acquire essential drugs and training of personnel.

On health, she said maternal and paediatric facilities at all health institutions including rural clinics will be established.

“Local authorities in co-operation with other statutory bodies will be responsible for inspection and reporting on the implementation of these standards,” Mahere said.