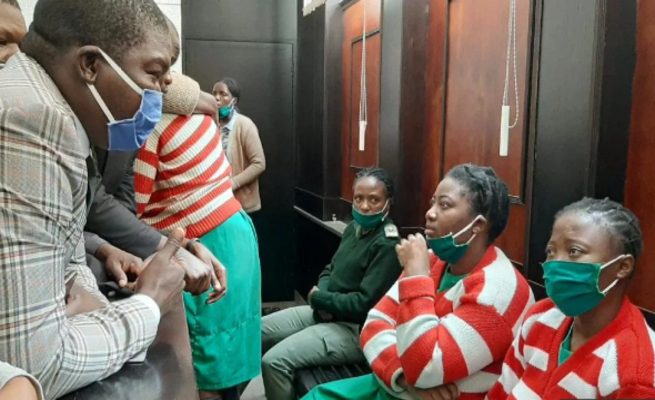 NEW details emerged yesterday during the trial of Citizens Coalition for Change (CCC) members Joana Mamombe (Harare West MP), Cecilia Chimbiri and Netsai Marova who are being accused of faking their abduction in 2020.

Andrew Manongore, the owner of the Mercedes Benz C type vehicle which the trio used and was parked at Harare Central Police Station at the time of their alleged abduction, said he had given the vehicle to Mamombe on May 13, 2020, the day the trio was allegedly abducted.

The vehicle is still parked at the Harare Central Police Station.

Giving evidence before Harare magistrate Faith Mushure, Manongore said he could not remember the vehicle’s number plates, but he identified it at the police station.

Prosecutor Michael Reza asked Manongore to confirm if the number plates were registered as AFE 9222, but he said if the registration number belonged to the Mercedes Benz vehicle parked at the police station, then it was his.

Further asked by Reza whether he was in control of that vehicle on the day the trio was abducted, he said Mamombe, Chimbiri and Marova had the vehicle.

In their defence, Mamombe and Chimbiri said they left the vehicle parked opposite Harare Central Police Station after they were arrested by some police officers who instructed them to lock it and get into a kombi which had tinted windows.

Manongore said he voluntarily gave the vehicle to Mamombe, but could not remember whether it had any special features.

He said his vehicle had no tracker, but had a spare key.

Mamombe and Chimbiri’s lawyer Alec Muchadehama asked Manongore to explain whether the vehicle could be opened in the absence of the owner.

But Manongore said he was not the one who assisted the police to park it in their parking lot.

“I was called by the police at a later stage to identify the vehicle at the Harare Central Police Station parking area. I cannot deny nor confirm their abduction as I also learnt about it on social media,” he said.

Manongore also told the court that he could not deny nor confirm that the trio parked the vehicle opposite the police station and that they were later abducted, tortured or se_xually abused in Muchapondwa village in Bindura where they were allegedly taken.

He is the sixth witness to testify in the matter. Other witnesses, Fortunate Machingauta and Takudzwa Shumbayaonda are expected to testify today.

Last week, Godfrey Mangezi from Econet Zimbabwe confirmed that calls made by the accused showed that they were located at the Harare Central Police Station.