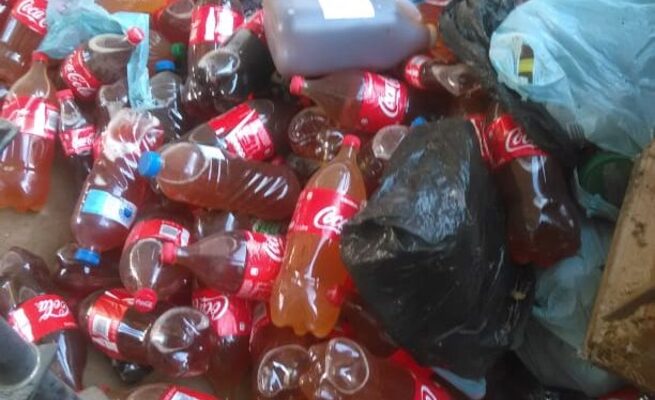 IN a bizarre incident in Beitbridge town, a shipping agent has been storing 220 litres of his urin_e in bottles in a rented house in Dulivhadzimo high-density suburb.

The man (whose name has been withheld for legal reasons) reportedly brought back his urin_e from wherever he travelled across the border, resulting in him accumulating in his rented room a stash of 110 two-litre plastic containers.

The containers were discovered by his landlord, Oltha Russel Muleya, during a forced eviction.

The man refused to talk to Southern Eye when contacted for comment yesterday.

“What do you do for a living? If you are a journalist I am not willing to speak to you,” the man retorted.

Muleya said the man was employed at a Beitbridge branch of a Bulawayo shipping company.

She said he failed to pay rent and left the premises on May 16 this year.

“We wanted to use the room, but he was nowhere to be found. He was no longer picking up my calls. This week we heard some movement in the room and decided to open and check if he was inside,” Muleya said.

“When my son opened the door, there was a heavy stench and we discovered the urine containers that were all over the room. We sought help to have his goods removed.”

“We have been to the police and he has been advised to take away his stuff.”

“We now understand that he has been commuting from Mwenezi where he is said to have been living with a traditional healer. He has not come back to pick up his goods,” she said.

Sources said the man had vowed that even if he relocates to Bulawayo he will ensure that his urin_e is brought safely to him.

“It was his practice that whenever he crossed the border into South Africa, he would bring back his urin_e,” said a man whose video clip has gone viral on some social media sites.

People in Beitbridge believe that the man may have consulted traditional healers who told him that a huge stash of urin_e would make him rich.