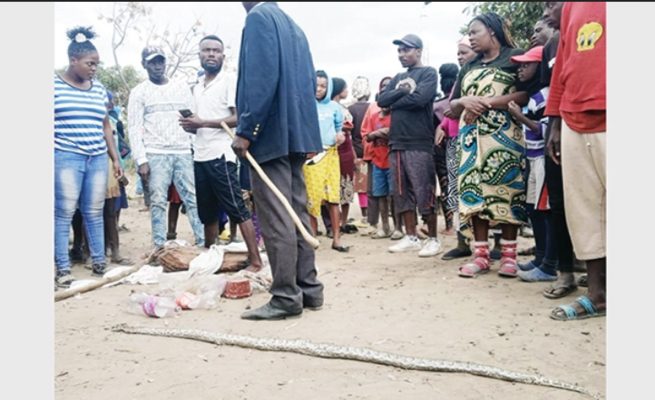 MYSTERY surrounds a Glen View 7 family following the discovery of a python in their house.

Reports are that the snake belongs to the father of the house, who is also a sangoma.

The incident has left some residents shell-shocked after claims emerged the snake has been “claiming” some lives.

Following mysterious deaths in the family, the children teamed up to invite a sangoma from Hurungwe.

When H-Metro arrived at the scene, residents were arguing whether the snake was genuine or it was just another stage-managed act by self-styled prophets.

However, the sangoma’s son, only identified as Liberty, said they surprised their father by consulting a sangoma to deal with mysterious deaths in the family.

“Our sister died mysteriously as she was coming from South Africa. As a family, we have been surprised by what is really happening.

“We have been moving around where they have been telling us that the cause of deaths was coming from our father.

“We then invited this sangoma from Hurungwe and this is why we have this today.

“Our father always lied that when we got inside the house we should not sit on the sofas yet he knew what was kept in the house,” he said.

He added: “He always said hamugarike mune masofa yet he knew he had a snake in the house.

“All the visitors didn’t even know.

“Don’t be fooled by what people are saying that the sangoma brought his snake, where the snake was put was well designed, so that no one could see it.

“Pane nhoko, I didn’t know a snake inoita nhoko. So, the sangoma suggested that the snake be taken to the river. People pushed the snake to be killed, my mother said she dreamt about the snake. She then rushed to take the axe before it was killed.

A woman, believed to be Liberty’s sister, said: “We came as a family without our father’s knowledge.

“We told him that we wanted someone to give him more power for his job.

“It was a strategy, as family members, since we have been seeing death many times and we are now afraid about who is next.”

Residents have been expressing mixed feelings following the ‘discovery of the snake.’

“The man has 13 children, and people keep a lot of things in their houses,” one of the onlookers.

Another resident was convinced the snake belonged to the owner of the house.

“How can he bring such a big snake? Taona vhunurwa where the snake used to be kept. People should stop lying.

“If you saw him spending money, you would wonder where he was getting all the money.

“The sangoma came from Hurungwe, and the snake was already feeding on milk, biscuits and sweets. The father is saying the snake belongs to his wife. He has been helping different people with several ailments.

“He is like a sangoma. They always do some parties here,” said another resident.