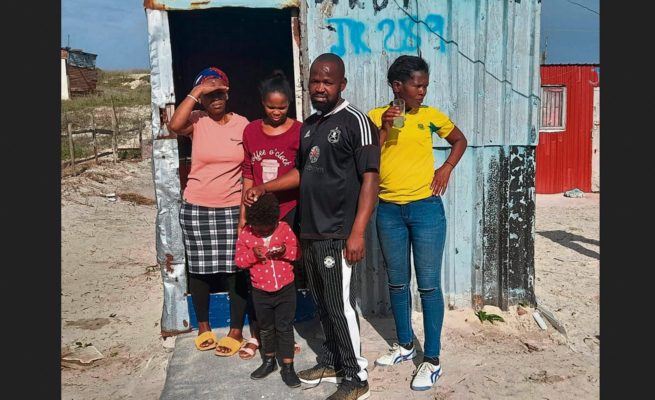 A FAMILY of six from Zam’pilo kasi in Khayelitsha lives in a shack that has so little space that some of the kids have to sleep under the bed.

“When we tried to extend some rooms of our shack in February it was demolished by the City of Cape Town. The city demolished the structure we had extended and left the old shack standing,” said the father of the house Mthobisi Hleza (38).

He told Daily Sun he struggles to get time for tlof tlof with his wife Nosithembele Hleza because in the afternoon he is at work and at night everyone is at home.

Nosithembele said: “We go for a month without tlof tlof. We have three children and two of my husband’s cousins live with us after they moved from the Eastern Cape.”

She said they are stuck.

“When my husband wants to bath, his cousins have to go out no matter how bad the weather,” she said.

Community leader Ncedo Pehana said the municipality has placed private security guards to patrol in their kasi to monitor whether people are building or extending their structures.

“Even if you are just putting a demarcation inside an existing shack, the security will knock at your door and stop you. If you don’t stop they call law enforcement. It’s unfair to residents,” he said.

He said this included placing guards to assist in the prevention of unlawful occupation.

“Residents are encouraged to operate within the confines of the law. The city also cannot condone the extension of already unlawfully occupied areas and there are clear policies against this,” he said.