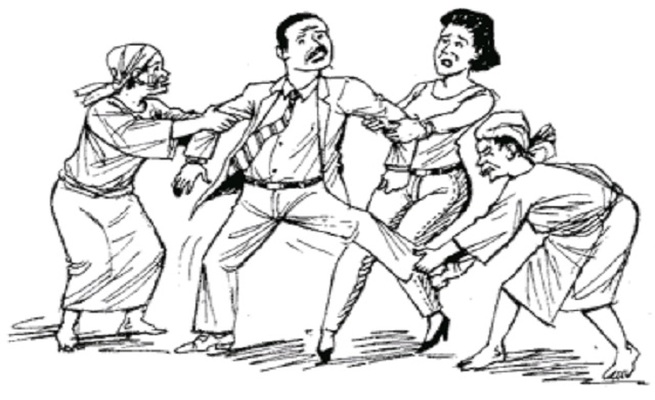 A GROUP of female spe_rm harvesters is on the loose in Bulawayo after three women reportedly drugged and se_xually assaulted a man who they had given a lift, with police warning the public not to accept free rides from strangers.

In the past, there have been reports of women who allegedly pounce on hitchhikers and later collect their sper_ms reportedly for ritual purposes.

Last month, three women allegedly kidnapped and took turns se_xually assaulting a 21-year-old man in Harare. The trio gave a lift to the man, along Samora Machel Avenue, before injecting him with an unknown substance. They then took turns raping him and collecting his seme_n.

In Bulawayo, 2016, three women allegedly abducted a man from Cowdray Park and forced him to have se_x with them before taking away his sem_en.

The suspected spe_rm harvesters were said to be driving a white Toyota Cresta.

In 2011, three Gweru women were arrested after being intercepted at a road-block with 31 used cond0ms containing sem_en.

The three, Rosemary Chakwizira, 24, Sophie Nhokwara, 26, and Netsai Nhokwara, 24, all of Mkoba Village Four, faced 17 counts of aggravated indecent assault but were acquitted due to lack of evidence.

“Police in Bulawayo are investigating a case of aggravated indecent assault whereby a male adult aged 26 of Pumula South was se_xually abused by three unknown female adults,” he said.

“Circumstances are that on the 27th of June 2022 at around 1900 hours the complainant was walking along an unnamed tarred road in Old Pumula, Bulawayo when he was stopped by one unknown female adult who was driving a blue Honda Fit (registration number unknown). “The driver asked the complainant for directions to reach Ashy’s Sports Bar, Pumula South, Bulawayo. The complainant offered to accompany the accused person since he was also going in the same direction,” said Insp Ncube.

He said the man entered the car and saw two more female occupants who were seated in the back passenger seat.

He said after gulping the drink the man lost consciousness and woke up on a bed with the three women nak_ed.

“The complainant became unconscious after drinking the beer and only gained consciousness when he was lying on a bed in a house somewhere with one female accused person standing nak_ed beside the bed but he cannot remember the place.

He said the man woke up the next morning, dumped near Robert Sinyoka Primary School.

“The complainant gained consciousness on 28 June 2022 at around 05:45 hours and he found himself lying by the roadside near Robert Sinyoka Primary School, Pumula, Bulawayo.

“The complainant discovered some whitish substance on his stomach while passing urine and he suspected that the accused persons might have had se_xual intercourse with him without his consent while he was in their custody,” said Insp Ncube.

He said on the same day at around 10AM, the man narrated the ordeal to his aunt who then accompanied him to the police station where he made a report.

Insp Ncube urged members of the public to help with information that will lead to the arrest of the women.

“We urge public members not to entertain and accept free rides from strangers. We appeal to the members of the public with information that may lead to the arrest of the accused persons to report to the nearest police station,” he said.

The rap_e of men is viewed as something hard to believe, as many in society cannot comprehend how a man can be erect and eja_culate under duress.

Traditionalists say it is possible for men to be rap_ed and these women might be using the sperm for ritual purposes such as getting rich.

“They give the men aphrodisiacs and after that one will be semi-paralysed and at the same time you are very aroused,” he said.

“Then they do as they wish with the person. The way of extraction is part of the ritual for them to get their desired results. They either use the sem_en for money rituals or even to fix certain men or to lure them. There’s muthi, as they mix it with sem_en and bathe with it,” said Mr Kandiero.

He said the victims need to be spiritually cleansed.

“Unfortunately for the victim, they need cleansing as this will affect them in bed as they won’t perform anymore and spiritually, you’re no longer okay. They need a diviner who will find out what happened to the victim as this is witchcraft,” said Mr Kandiero.

He said the spe_rm has to be taken by duress as the spells will not work if it is given up voluntarily.