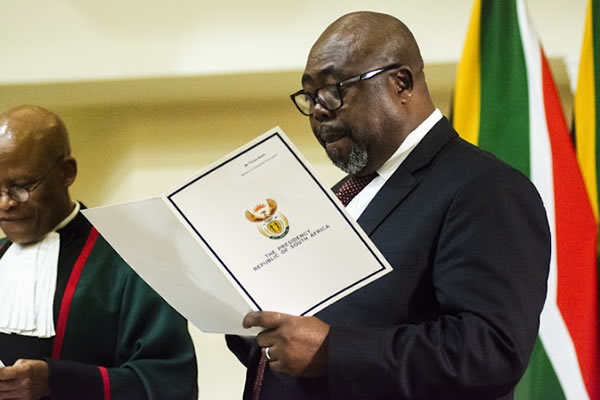 AS South Africa readies itself to face a legal fight over Zimbabwean Work Permits, the Employment and Labour Minister, Thulas Nxesi is pressing ahead with the National Labour Migration Policy (NLMP) and Employment Services Bill aimed at introducing quotas for foreign nationals working in the country.

The Helen Suzman Foundation recently filed a lawsuit over permit withdrawal that will affect about three million foreign nationals living in South Africa.

The pending lawsuit comes following South Africa’s decision to end a special dispensation that allows about 200 000 Zimbabweans to live and work in the country and is being challenged in court by a civil rights group. The Helen Suzman Foundation is on record as saying it has filed a lawsuit challenging the decision, which was taken without public consultation.

Once the bill becomes law, it will empower the responsible minister to determine quotas for the employment of foreign nationals in one or more economic sectors, occupational categories, nationally or even regionally in a sector.

The public was invited to participate in the consultation process, which ended on May 31.

Foreign nationals, under the bill, would only be permitted to work in South Africa if they have the appropriate work visa, have an asylum seeker permit endorsed with the right to work or if they are permitted to work according to an international agreement. This portion of the bill is aimed at restricting employment of foreign nationals to those holding recognized types of work authorisations.

Once the Bills comes into effect, the minister responsible for labour and employment will be empowered to set up quotas for the employment of foreign nationals in one or more sectors, occupational categories, nationally or even regionally in a sector. In determining quotas, the minister will consider the availability of skills among South African citizens, permanent residents and refugees.

Before implementing the quotas applicable for a sector, region or position, the Minister of Labour and Employment may issue a notice to employers subject to quotas. Employers will have 30 days to comment on the impact of the quota on their operations.

The bill states that employers must ensure that there are no locals qualified to take over the position by conducting a labour market test, as the immigration law requires for a general work visa option.

The bill emphasises that employers must maintain records of lawful employment of foreign nationals for workplace audits, as is already required by the immigration law. Employers who fail to comply with documentation obligations may face fines.

Once the bill has become law, foreign nationals may face an additional administrative hurdle to the work authorisation process since they may be subject to a quota within their sector, occupation, or based on the region in which they work.

According to the South African authorities, the draft National Labour Migration Policy and Employment Services Bill is intended to ensure that locals have access to economic opportunities, following high unemployment rates during the Covid-19 pandemic. Foreign workers quotas are expected to be imposed in sectors, occupations and regions where the employment of more foreign nationals is found to be concentrated.

Through the adoption of quotas, South Africa will align with other African countries that use quotas, such as Mauritania and the Democratic Republic of Congo. In a recent media briefing, South African Employment and Labour Minister Nxesi said the policy has been researched extensively and benchmarked internationally for best practice.

Minister Nxesi argued that the first point is to address South Africans’ expectations regarding access to work opportunities, given worsening unemployment and the perception that foreign nationals are distorting labour market access.

“The NLMP, together with proposed legislation, will introduce quotas on the total number of documented foreign nationals with work visas that can be employed in major economic sectors such as Agriculture, Hospitality and Tourism, Construction et cetera.”

Minister Nxesi added that the Department of Home Affairs is also reviewing legislation and strengthening the Border Management Authority to secure porous borders and to allow for the orderly movement of people and other nationals through ports of entry only.

He said his department, together with all relevant authorities, will step up inspections to enforce existing labour and immigration legislation.

The development comes amid growing tension among locals and foreign nationals in South Africa, with repeated protests by locals against foreign nationals who work in the cross-border transport sector and those into vending in bus terminuses and city centres. Most of the protests, some which have turned violent, are led by a group calling itself Operation Dudula.