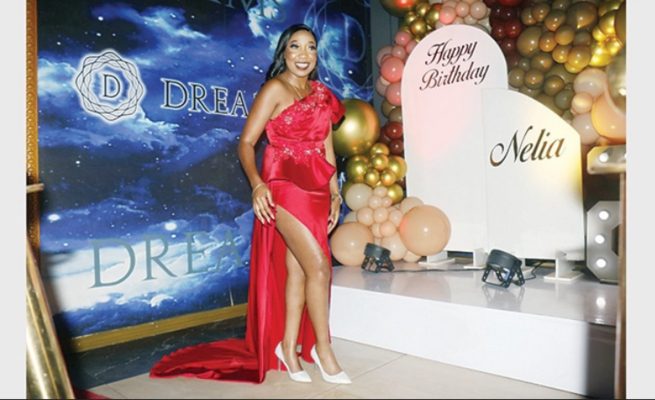 The event, which culminated into a musical and fashion show, attracted well-to-do guests from more than seven countries.

Guests came from the UK, US, Botswana, Namibia, Tanzania, Kenya and South Africa.

As expected, the event was marked with elegance and swag.

For a stranger, it was more of a Ginimbi show as the guests popped expensive champagne.

Nelly appeared to be copying from the late Ginimbi’s template given her late brother was known for shaking the city each time he partied.

Like most of Ginimbi’s birthdays, Nelly did not accept cash presents.

The only difference was that it was a cash bar unlike Ginimbi, who would make sure his inner circle downed expensive liquor on his account.

Nelly came clad in a red outfit while rolling in matching sleek wheels, befitting such a high-profile event.

Nelly changed twice and was all over like her late brother who would make sure he called the shots, each time he hosted his events.

For the first time in months, parking was already taken by midnight.

It was a big pay-day for parking marshals and street kids.

Taxi drivers had a bad day in office as the majority of the guests came driving in their posh vehicles, befitting Ginimbi’s lifestyle.

Nelly, who now calls herself Nelimbi, invited the trio of ExQ, Nox and Jah Signal to provide entertainment.

The three entertainers used to perform at Dreams during the late businessman’s time.

The trio did not disappoint with Jah Signal stealing the show.

It was indeed a night to remember for the guests.

Meanwhile, there was drama when an unidentified woman, who appeared to be in a trance, approached Nelly claiming they didn’t follow the tradition when they organised the party.

The woman, who was blocked from talking to Nelly, could be heard saying:

“Failure to do so will certainly invite trouble in the form of misfortunes like more mysterious deaths.

“Ginimbi died on his way from a birthday bash and the same can happen if you don’t listen to me.”

The party ended yesterday around 5am.

One of the girls, who was accused of stealing a cellphone, was stripped naked.

News Muza Mpofu - 15 August 2022 0
A Zanu PF councillor in Chiredzi is in the centre of a storm after three girls were expelled from Hippo Valley High School following...

Mnangagwa is the Biblical Moses who came to rescue us from our problems: Prophet...

TRAGEDY: 5 injured as gas stove explodes during a party

News Tanya Mugabe - 15 August 2022 0
About 40 000 people turned up for the CCC rally held at Mucheke Stadium yesterday afternoon despite heavy Police presence and a tight clampdown...

News Muza Mpofu - 15 August 2022 0
CITIZENS Coalition for Change (CCC) leader Nelson Chamisa has said his party is not a violent organisation and will never engage in any mayhem...

Sports Edmore Huni - 15 August 2022 0
CHARLES “Mafripa” Dzvairo, the businessman who was at the centre of a family dispute which recently spilled into court, amid allegations of witchcraft, has...

Armed robbers raid prominent businessman’s offices, get away with US$70 000

Sports Muza Mpofu - 15 August 2022 0
BUSINESSMAN Simba “Buju” Ndoro, lost US$70 000 when armed robbers struck at his office in Shamva on Saturday. Ndoro, who is the president and owner...

I was informed by friends that my wife was getting married: Man cries as...

News Muza Mpofu - 15 August 2022 0
A ZIMBABWEAN man is in shock after discovering that his wife secretly got married to another man. The woman went into another union despite her...