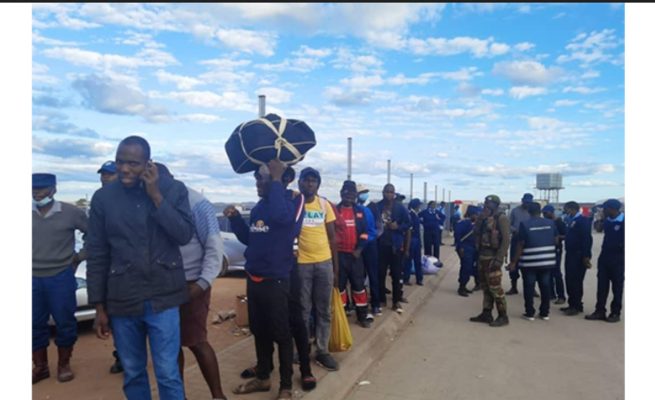 THE Department of Immigration’s Regional Compliance and Enforcement Unit has intensified operations at the Beitbridge Border Post to prevent cases relating to irregular migration between Zimbabwe and South Africa.

The move is meant to curtail criminal activities, among them border jumping, touting, the use of fake immigration stamps, and fake travel documents that are synonymous with a surge in human traffic.

Regional Immigration Officer in charge (Beitbridge), Mr Joshua Chibundu, said they were working with other border agencies who are part of the newly formed enforcement committee that was put in place to deal with the problem of touts, vendors, and vagrants on the border.

“We managed to arrest a total of 161 people for violating various border-related laws between Thursday evening and Saturday evening,” he said.

“These include vendors, touts, vagrants, and undocumented immigrants and migrants. So, we are targeting all known hotspots and areas where the above-mentioned group of people usually operate from.

“We want to warn border users that those who are caught on the wrong side of the law will be dealt with accordingly.”

Mr Chibundu said the ongoing operation was a brainchild of the all-border stakeholders meeting that was held on Wednesday. The lifespan of the programme, he said, will be decided at the next stakeholders’ meeting.

He said they had also created another committee on the awareness that is running concurrently with this blitz on border crime.

“As we continue to enforce the law, we are also educating travellers and the general Beitbridge community on the need to embrace safe migration methods,” added Mr Chibundu.

The border authorities are targeting those travellers using the New Freight Terminal (NTF), the bus terminal, border parameters, north and south entry gates, and the sections of the light vehicle, commonly referred to as the ‘Malume Zone’.

All the arrested, Mr Chibundu said, were handed over to the police for further management.

He said authorities were determined to make the new look border a world-class facility that is closed to illegal activities but only open to genuine travellers.

“We are also fighting to curb and eliminate irregular migration as well as to well to minimize the issue of genuine travellers falling prey to touts who misdirect and rob them of their hard-earned money,” said the official.

Mr Chibundu said they will continue to work hand in glove with other security stakeholders and the South Africans to curb border-related crimes.

By the end of the day yesterday, the enforcement teams were hard at work conducting spot checks on all vehicles entering and living the country through the border.

The senior immigration official advised travellers to always abide by the set down rules to avoid unnecessary situations.

He said they must avoid the use of wheeler-dealers or touts who besides leading them astray often rob many of their money in botched deals.