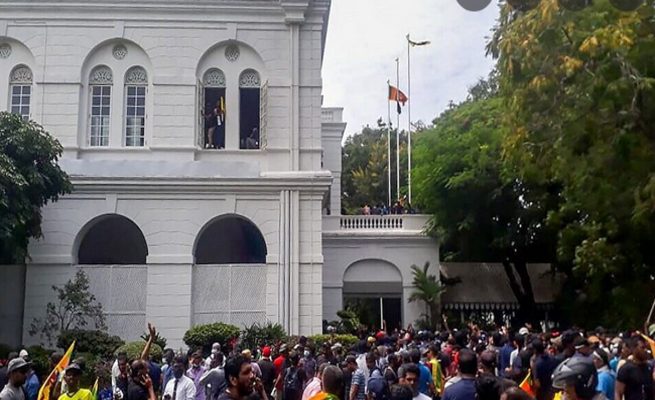 Rajapaksa’s resignation came after a dramatic week in which the beleaguered leader fled the country under the cover of darkness, after his presidential palace and offices were stormed by protesters last weekend.

The formal announcement of Rajapaksa’s resignation was made in a televised address by the speaker, Mahinda Yapa Abeywardena, on Friday morning.

Wickremesinghe was sworn in as the interim president shortly after the resignation was formalised, as per the constitution.

His appointment is highly controversial, however. Calls for his resignation continued to echoed out across the streets of Colombo by crowds who have accused him of protecting and propping up the Rajapaksas, and his office was occupied by protesters this week calling for him to step down immediately.

“We demand that Ranil Wickremesinghe also resigns. He is just as bad and corrupt as Gotabaya and he does not have any support from the people. How can he call himself our president?” said Kasun Viraj, 25, a student protester.

Wickremesinghe will remain president until a vote is held by MPs in parliament and a new president is confirmed, a process likely to take seven days, said the speaker.

Despite his apparent lack of popularity among protest groups, the ruling Sri Lanka Podujana Peramuna (SLPP) party on Friday nominated Wickremesinghe to be its presidential nominee in next week’s vote.

The fall of Rajapaksa as president follows months of sustained protests calling for him to step down. Many hold the president responsible for driving Sri Lanka into its worst economic crisis since independence in 1948, which has led to severe shortages of fuel, food and medicines. Along with several members of his powerful family who held political posts, he is accused of economic mismanagement and widespread corruption.

Rajapaksa is currently in Singapore, where he fled to on Wednesday, via the Maldives. His resignation letter was sent late on Thursday night, first via email and then the original dispatched on a diplomatic flight, but the formal announcement was delayed until Friday while the speaker’s office verified the letter.

The announcement was met with triumph by the mass protest movement that has been mobilising for months across the country to demand Rajapaksa to resign.

“We are very happy. Today is a historic day,” said Supun Udara, 24, a student, who for the past three months has been part of a residential protest camp on Galle Face Green outside the president’s offices in Colombo, demanding his resignation.

“We all know the Rajapaksas are thieves – that’s why we stayed here, day and night, for three months. They stole money from us while we were suffering and people could not eat. There’s still no fuel. They had everything while we have nothing.”

Rajapaksa’s decision to flee without resigning had left Sri Lanka in a state of political limbo for more than 36 hours, and tensions had run high in the country, which remained in a state of emergency. Even after his formal resignation, Rajapaksa made no address to the Sri Lankan people he had governed since 2019.

In a televised statement after he was sworn in, Wickremesinghe said he would initiate steps to change the constitution to curb presidential powers and strengthen parliament, restore law and order and take legal action against “insurgents”.

Abeywardena requested that all political party leaders “extend their support” for a smooth selection of a new president, and to “uphold democracy” during the transition.

Parliament will reconvene on Saturday, to begin the process of installing a new all-party “unity” government, made up of a multitude of political parties.

Rajapaksa had promised to hand over power on 13 July to ensure a “peaceful transition of power” but the deadline had passed without any sign of his resignation letter. He had immunity from arrest while he was president and many believed he was looking for a safe haven country before he relinquished power, in order to protect himself from prosecution from longstanding accusations of war crimes and corruption.

The Singapore government confirmed that Rajapaksa had not sought asylum in their country. His final destination remains unknown. On Friday, Sri Lanka’s top court barred two of the president’s brothers, the former prime minister Mahinda Rajapaksa and former finance minister Basil Rajapaksa, from leaving the country without permission until 28 July.