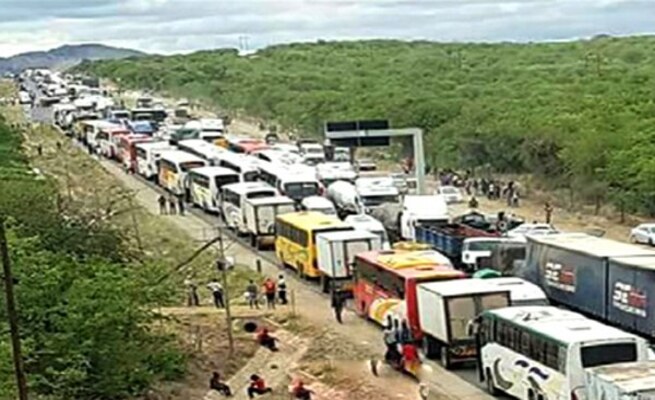 THERE were long delays in clearance of commercial cargo at the Beitbridge Border Post yesterday, as South African Revenue Services (SARS) customs officials continued their strike pressing for a 12 percent pay rise.

The employer is offering 1,69 percent, and that gap has resulted in a crippling stalemate. SARS offices and border posts are now manned by managers who don’t fall under the collective bargaining category.

The strike has led to slow movement of commercial cargo entering or leaving South Africa.

The long queues of trucks are also affecting road works in Beitbridge.

At its peak, the Beitbridge Border Post clears between 900 and 1 200 trucks a day. But now long and slow-moving queues of commercial trucks have become common on the main highways leading to Bulawayo and Harare in Zimbabwe and Musina in South Africa.

Beitbridge Border Post links South Africa not just to Zimbabwe but also to all points north, including other Sadc countries Malawi, Zambia, DRC, Tanzania, and Angola.

In a statement last week, SARS said it had come up with contingency plans to ensure continued services to its client pending a resolution of the salaries dispute.

“SARS apologises for any inconvenience caused due to the industrial action taking place across SARS, we are experiencing delays in servicing our taxpayers.

“While some branches may be closed to the public, they will continue to honour virtual appointments, as booked. In the event that a virtual booking is not honoured, please note that the branch will follow up to do the necessary service recovery. Please continue to also make use of our digital services during this time.”

The minister visited Beitbridge to unveil the first batch of 200 border guards, who have been deployed to strengthen operations at the ports with Lesotho, Eswatini, Mozambique and Zimbabwe.

These fall under the newly constituted Border Management Authority, which is operating under the Home Affairs Ministry pending its independence in April next year.

“We have heard about the strike here and this has nothing to do with Home Affairs, but our hope is that the SARS commissioner and the employees will resolve the issues as soon as possible,” said Minister Motsoaledi.

In separate interviews, Zimbabwean border authorities said the clearance of trucks going either direction was depressing.

“We are clearing the vehicles in small numbers because of the congestion on the South African side. We are hoping that a solution will be arrived at soon,” said one border official.

Trucks drivers said they were spending almost half a day crossing into either country because of the ongoing strike in South Africa.

Under the current set up, all commercial bills of entry are being processed electronically and these are processed at Harare, Masvingo, and Bulawayo document processing centres.

When these bills of entries are processed, the trucks are then given the green light to the port of entry or exit where authorities just check for conformity.

Mr Petros Nyuke said under normal circumstances, they spend less than an hour to complete all the border formalities at the border, especially after the streamlining of operations at the new Zimbabwe freight terminal.

“We are told there is a job action in South Africa and this is delaying our movement as truck drivers,” he said.

A customs clearing agent, Mr Hardlife Majaya, said they were worried about the state of affairs on the South African side.

Having many vehicles along the roads that are under construction was causing a traffic jam.