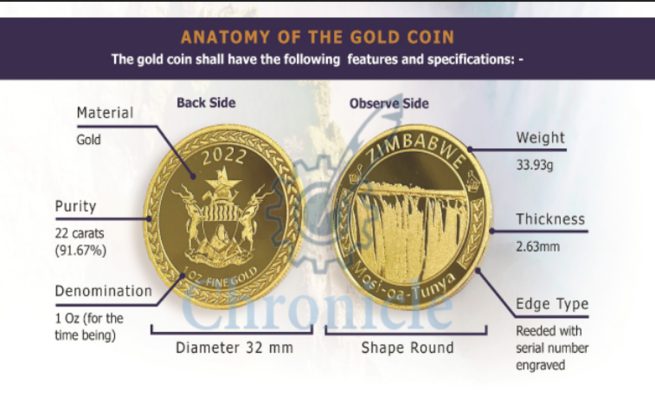 The Reserve Bank of Zimbabwe (RBZ) will release the Mosi-oa-Tunya gold coins onto the market today and they will be sold in local currency, US$ and other foreign currencies.

Their price is based on the prevailing international price of gold plus five percent to cover the cost of production and distribution of the coin on a payment versus delivery basis.

Individuals and institutional buyers of the coins will be required to hold them for at least 180 days before selling them while exporters earning less than US$1million will be allowed to use the surrender portion of their receipts to purchase the coins in foreign currency.

The Mosi-oa-Tunya gold coin, named after Victoria Falls is made mostly of gold.

Most gold coins minted since 1800 are 90–92 percent gold (22 carats), while most of today’s gold bullion coins are pure gold, such as the Britannia, Canadian Maple Leaf, and American Buffalo.

Alloyed gold coins, like the American Gold Eagle and South African Krugerrand, are typically 91,7 percent gold by weight, with the remainder being silver and copper.

“The gold coins will be available for sale to the public from 25 July 2022 in both local currency (ZW$) and United States dollars (US$) and other foreign currencies at a price based on the prevailing international price of gold plus 5% to cover the cost of production and distribution of the coin on a payment versus delivery basis,” said RBZ

Selling agents, among them banks and the RBZ’s subsidiaries namely Fidelity Printers and Refiners and Aurex Jewellery shall sell the gold coins in both local currency and United States dollars and other tradable or denominated foreign currencies at the willing-buyer willing-seller exchange rate.

Domestic buyers such as individuals and institutional investors will be allowed to buy the gold coins in local currency or foreign currency, subject to quantity restrictions where it is deemed necessary to avoid unintended consequences.

On the other hand, international buyers will only buy the Mosi-oa-Tunya gold coins in foreign currencies.

“At the discretion of the holder of the gold coin, the Bank or its agents will buy back the gold coins after a vesting period of 180 days in line with the need to promote a savings culture in the country,” read the statement.

In the meantime, local banks will not be allowed to buy the gold coins for their own portfolios until the RBZ decides otherwise in line with developments in the economy.

For the buy-back, RBZ or its agents shall request the bearer to surrender the original bearer certificate for the specific coin.

“Coins shall be purchased at the prevailing international spot price of gold.

On redemption, both residents and non-residents (international buyers), will have a choice to request payment in US dollars or local currency,” said RBZ.

The Central Bank said the “know your customer” (KYC) principles will be strictly adhered to at all times.

Among other characteristics, the gold coin will have “liquid asset status, prescribed asset status, can be used as collateral, it is tradable and can be bought-back at the instance of the holder,” said RBZ.

The central bank is on record saying the coins, which are chiefly meant to provide an alternative to the US dollar as a store of value, will help reduce demand for the greenback while strengthening the local currency.

According to the RBZ, exporting companies earning less than US$1 million will be able to buy the coins in hard currency from their retained export earnings.

Briefing the Parliamentary Committee on Budget, Finance and Economic Development on the operation of the foreign currency auction system and measures being implemented to stabilise the Zimbabwe dollar, RBZ Governor Dr John Mangudya said the introduction of gold coins would offer an alternative investment instrument for both individuals and corporates.

“The first step is to ensure that we absorb the excess liquidity that is in the market and is used for storing value.

So, where people were going to the parallel market to look for a store of value, we are giving them an alternative instrument which is the gold coin to invest into,” he said.

Dr Mangudya said ordinary Zimbabweans will benefit because if people don’t go to the parallel market, the rate will stabilise hence the ordinary person will benefit more from the stability that these gold coins will achieve.

“If they are bona fide transactions, we are giving them an alternative product that they can invest in so that they no longer go to the parallel market,” he said.