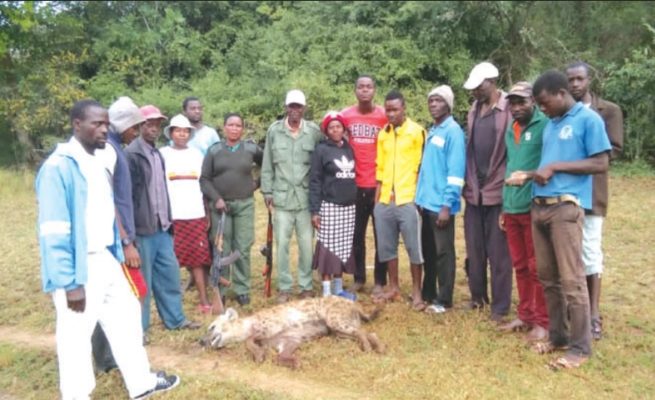 A Zaka couple and their son were left badly injured after being severely attacked by a clan of hyenas in Bota communal lands on Monday afternoon as they tried to protect their cattle from the marauding wild animals.

In heart-rending fashion, the family members from Mapfumo village were attacked one-by-one as they sought to rescue each other.

First to be attacked by the hyenas was the son, Rwatinga Maroyi.

As his father, Robert Maroyi, sought to save him after being pinned down by the hyenas, the hyenas turned on him and slammed him on the ground.

Pained by the brutal attacks on her husband and son, the mother of the house, Muchanyara Munodya intervened and like the first two, she was badly mauled on the hands and lost both palms.

Other villagers came to the rescue of the Maroyis and managed to scare away the hyenas.

All the three are now hospitalised at Musiso Hospital where their condition is critical but stable.

Robert’s brother who declined to give his name confirmed the horrible episode saying his brother was mauled on the face and head and was in a terrible situation, though the doctors are saying the victims were on the recovery path.

He said Robert’s wife had both hands crunched, with the mouth and nose also chewed and left with one hand. “It was a terrible incident and doctors are trying to repair the victims but now all the three cannot feed themselves. They are being assisted to feed. You need a strong heart to look at them. Robert’s face was left tattered and the chest as well. It is terrible. It is unimaginable that one would sleep today with both their hands but before sunset the following day, they no longer have hands and have to be fed, bathed and clothed by someone,” he said.

He appealed to the Government to chip in and assist the family as it was left in a situation where all three can no longer work to feed themselves.

“Our team (of game rangers) is on the ground to trek the hyenas. Those who were attacked are hospitalised and are out of danger as of now,” said Mr Farawo.

The attack on the Zaka family by the hyenas has once again cast the spotlight on the increasing cases of human/wildlife conflict countrywide especially considering that the attack on the Maroyis occurred during the day.