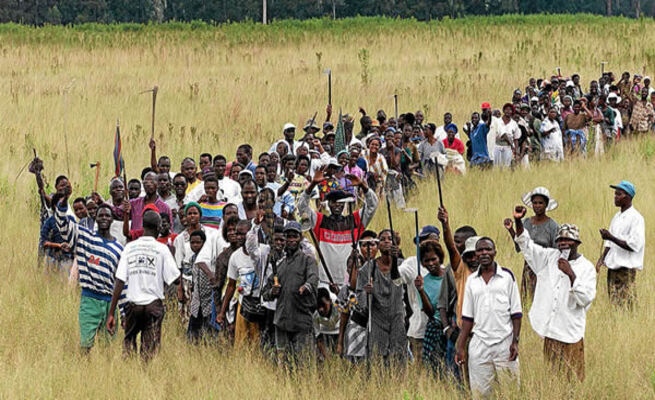 A TOTAL of 68 resettled families that have been evicted from Seaborough Farm in Makwati area of Umguza District in Matabeleland North province have approached the High Court challenging their eviction from the disputed property.

The villagers, who claim to have been resettled by the Government 20 years ago, were served with an eviction order by the Agriculture and Rural Development Authority (Arda).

They want an order interdicting the respondents from evicting them from the farm as well as interfering with their peaceful possession of their pieces of land.

In his founding affidavit, Mr Dube, who is representing all the applicants, argued that their eviction was illegal given that when they were resettled 20 years, the land had not been gazetted or leased.

“I am an applicant in this matter together with 67 others who are also occupants of a certain piece of land namely Makwati village in Seaborough Farm, Umguza District.

“Some time at the beginning of September 2020 the first respondent (Dr Masuka) issued summons with an order for our eviction claiming the land constitutes gazetted land, and that it had been leased to second respondent (Arda), which summons are still pending,” he said.

“The respondents and their agents have unlawfully interfered with the applicants’ peaceful and undisturbed possession by evicting them from the land without lawful authority.”

The applicants, who are all veterans of the liberation struggle, said their matter was extremely urgent and could not wait to be heard in a normal way, arguing that they continued to suffer irreparable harm.

“The applicants have prima facie right to be heard and to be given reasons for any decision, which negatively affects them.

“Balance of convenience favours the granting of the application as there is no alternative relief to the order being sought,” said Mr Dube.

He said they were settled by the Government 20 years ago and were reassured that the land was not gazetted or leased.

“The respondents have invaded our land, which we have occupied peacefully and undisturbed for over 20 years and have begun removing us from the land. The respondents have started erecting boundary fences within our properties, and forcing us to relocate to rocky and infertile land,” said Mr Dube.

“I submit that the first respondent resettled us on the land 20 years ago and assured us of having full occupation and guaranteed that the land was not to be leased out or gazetted.

“Ever since that time, we have been in peaceful and undisturbed possession of our portions of land where we are involved in various farming activities until July 14, 2022 when the respondents ordered us to vacate the land.”

Mr Dube argued that proper procedures were not followed as they were evicted without a court order.

“Accordingly, I implore this Honourable Court to intervene and prevent the respondents from further disturbances of our possession and occupation of the land,” he said.

“I pray for a final relief with punitive costs against the respondents who clearly used their power and office to take the law into their own hands.”

Mr Dube said the legal proceedings around the matter are still ongoing and nearing pre-trial stage.

The applicants want the court to order the respondents to return the status quo prior to this spoliation.