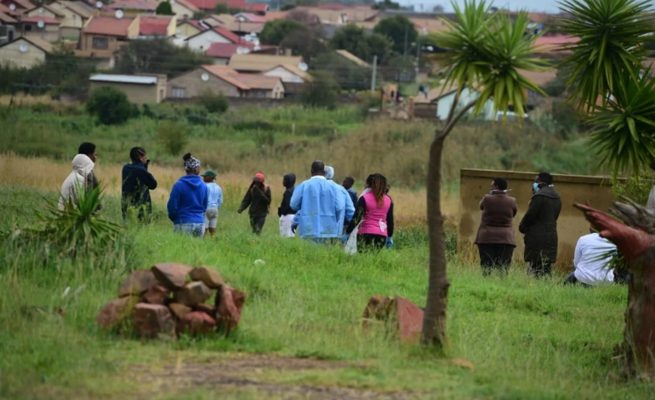 TO THE young boys it was just a gun – just a toy lying around to be played with.

But their game has ended in unspeakable tragedy.

THE CRACK OF A GUNSHOT HAS CHANGED THE LIVES OF THOSE LEFT BEHIND FOREVER.

Orifile Maphutha (8) from Atteridgeville, Tshwane, was accidentally shot dead by his eight-year-old friend on Friday, 29 July.

The incident has left Orifile’s family heartbroken and shocked.

According to the family of the victim, the two boys were playing together at Orifile’s home when the friend asked him to accompany him to his house so that they could go and get money to buy sphatlho (bunny chow).

The friend wanted to get money from the wardrobe in the passage at his house.

But instead of finding money for the sphatlho, the little boy laid his hands on a gun. Orifile was shot in the eye and died instantly. Orifile’s mother, Thato Maphutha (34), told Daily Sun she last saw her son alive on Thursday, 28 July, when he asked for money to buy food at the Walton Jameson Primary School in Atteridgeville, where he was a grade 3 pupil.

Orifile Maphutha (8) was shot dead by his 8-year-old friend in Atteridgeville on Friday.

“My son asked me to buy him a bicycle,” she said.

She said he had seen a second-hand bicycle not far from where he lived.

“He insisted that I must remember the bicycle because he wanted it very much,” she said.

But then he died before getting it.

“I heard Orifile had been killed by his friend. It was so painful to see my son lying dead,” said Thato.

She said Orifile loved football and was a talented athlete.

“I want justice for my son. Why was the man careless with a gun?

“Why was it left loaded with ammunition?” she said.

Orifile’s aunt Dinah Ralepelle (72) said: “I am struggling to accept that my nephew is gone.”

She said this was the worst moment of their lives.

Family friend Rachel Rapatsa (45) said: “We were hoping that he will grow up to become a doctor. but now he’s gone.”

Orifile’s aunt Letlhohonolo Khumalo (28) said: “We were so close to my brother’s son. We want justice for his death.”

Letlhohonolo said when Orifile was born, she went and had a tattoo to acknowledge him because she was happy that she finally had a nephew.

She told Daily Sun the tattoo is of a musical note because when she heard that Orifile was born, it was music to her ears.

Lehlohonolo said the tatoo will now serve as a remembrance of Orifile.

“It will keep me connected to him,” she said.

Orifile will be buried on at Lotus Cemetery in Pretoria West.

Daily Sun visited the home of the boy who allegedly killed his friend but when the team arrived, there was no one there and the premises were locked.

Colonel Dimakatso Sello said: “A case of failure to lock a firearm in a prescribed safe was opened.”

She added that the owner of the gun was arrested and a murder case was opened.