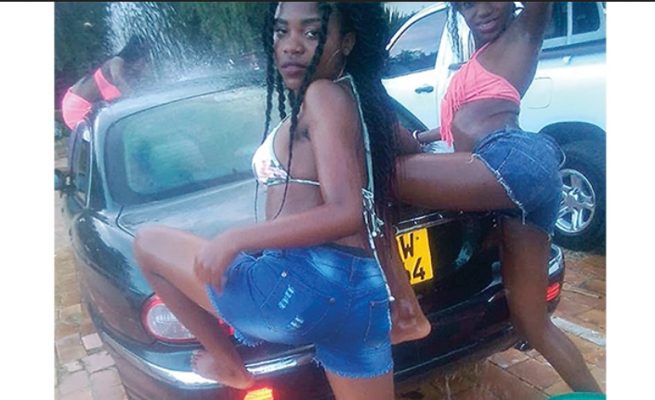 Vuzu parties are indoor gatherings that are common in Bulawayo.

They are mostly held by teenagers without adult supervision where beer drinking, drugs and illicit s3_x take place.

The organisers advertised the event using social media but the specifics of the venue remained a secret.

The organisers only indicated that the party would take place on August 4.

The orgy-like event which was slated to be held under the theme “Be Mine s3_x Party” where the pupils were going to openly engage in various lula lula acts while competing with one another.

Investigations by B-Metro established that it was a party to celebrate leaving school at the end of the second term.

It was busted by some alert parents after it received high publicity on social media.

Part of the requirements for participants on the invitation obtained by B-Metro was that attendees, particularly girls, were going to be in ling3rie.

The party was expected to go on until 8pm during which participants would engage in s3_x marathons.

The victors of the competition were termed king and queen of the moment and were going to get all the gate takings which were going to be collected before the party.

Parents who stumbled on details of the planned s3_x party acted promptly and sent warnings to others asking them to be on heightened alert.

“Dearest Parents. Please note that it has come to our attention that learners from schools around Bulawayo are planning to have a Vuzu party tomorrow (Thursday).

“Please do talk to your children and please check their satchels for civilian clothes as they leave home”, read the message that was circulated on social media alerting parents of the planned s3_x party.

The leaked s3_x party advert received criticism from parents who also revealed how it was planned and executed away from the prying eyes of the public.

Glory Maplanka from Northend suburb said the planned s3_x party was a tip of the iceberg of what is happening in children’s social lives.

“The planned s3_x party is a social problem we need to nip in the bud because those children who have planned have social links with many other children who they may corrupt if preventative measures aren’t taken.

Juvenile delinquency is a real problem we are facing as parents of today,” said Maplanka.

Investigations by B-Metro also established that some of the school children who attend these infamous s3_x parties are ‘spoilt brats’ who can afford to spend on beers and drive their own cars.

“Where have we gone wrong as parents for our children to engage in such lula lula depravity? Is this the kind of life that we are modelling to our children? Something needs to be done to avoid the holding of such s3_x parties,” said another parent.

Martha Sibanda said although the organisers were supposed to be arrested there could be other older men who were working behind the scenes.

“Who knows, perhaps the s3_x party could have been sponsored by people who produced the X-rated images and videos that are always going viral on social media.

“We should, however, thank those parents that stumbled on details of the planned party for their bold decision to expose by sending to different WhatsApp groups,” she said.

Meanwhile, Bulawayo police spokesperson Inspector Abednico Ncube had not yet responded to the inquiry sent to him by the time of publishing.