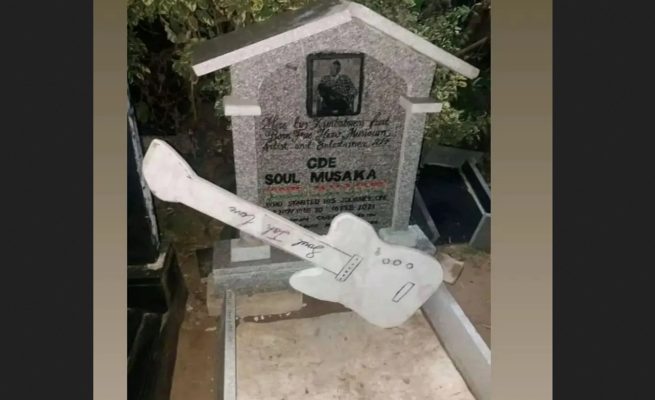 THERE have been a number of clashes involving youths, trying to visit Soul Jah Love’s grave, and council guards at Warren Hills Cemetery.

Among those involved in the running battles with council guards are school children.

One of the workers revealed this to the late chanter’s sister, Caroline Musaka.

“We have been fighting running battles with some young people visiting the grave to take photographs,” said the worker.

“The grave of Soul Jah Love is not ordinary since he is among our liberation heroes.

“We do not allow people to visit the graves without the family and local authority’s permission,” he said.

Chipaz released a statement related to the visit.

“On behalf of Chipaz Promotions, fellow music promoters in Zimbabwe and on my own behalf, we have decided to join the Musaka family and friends today, as they lay some wreaths on Soul Musaka’s grave as a way of appreciating his work.

“He was, indeed, a singer of the people whose music is set to live on for years.

“We made this gesture just to appreciate him and the family for giving us this rare talent.

“With the blessing of Soul Jah Love, we will continue remembering him for the good things he has done for the industry.

“His memorial service will now be held at the Glamis Arena.

“We would have wanted to hold it at a bigger venue like the National Sports Stadium but we have settled for the Glamis Arena.”