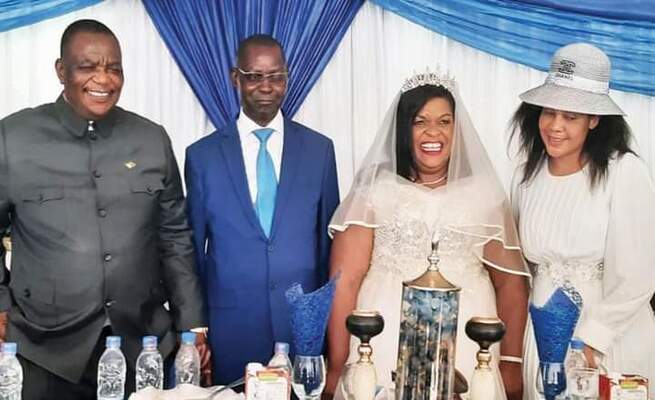 PRESIDENT Mnangagwa has called on citizens to uphold peace ahead of next year’s harmonised elections.

In a speech read on his behalf by Vice President Constantino Chiwenga during Lieutenant General (Rtd) Ambasador Anselem Sanyatwe’s renewal of wedding vows with his wife in Nyanga, President Mnangagwa said Zimbabweans must shun violence before, during and after elections.

They renewed their wedding vows at Regina Ceoli Mission yesterday.

President Mnangagwa said “Let us all make sure we maintain peace before, during and after elections.

“The message is peace, peace, peace. Those that will come and try to entice you to be involved in violent activities should be politely ignored.

“We can only build our country when peace is prevailing. We are one people,” said President Mnangagwa.

He congratulated Ambasador Sanyatwe and his wife for setting a good example, not only for their family but the community that looks up to them as leaders.

“The President really wanted to be here but because of pressing commitments he could not and that is the reason he sent me here to represent him and convey his message. He congratulated the Sanyatwe family as well as the Nyanga North family for this achievement. A wedding is a gift from God and we really need to applaud the effort made to have it. It sets a very good example for the young, most of whom are now being wasted by drugs. We are grateful to the churches that raised these two (Sanyatwes) and it is amble evidence that when children are raised in church they get the proper upbringing they need because they obtain good teachings from the church and the family as well. Our youths should emulate this. May God bless this union,” said VP Chiwenga.

“We have been friends with Ambasador Sanyatwe since the days of the liberation struggle when I was Commander in the Manica while he was in the Bare we now know as Mashonaland Central, which also covered some parts of Mashonaland East. We remained friends after independence when we both served in the Zimbabwe National Army at Five Brigade in the Midlands. We then reunited at army headquarters in Harare and up to this day we are still working together. Unbeknown to me until a later stage, we are both Catholics,” said Vice President Chiwenga.

In an interview Ambasador Sanyatwe said: “We are really excited about this. We had our wedding years back in court but we have decided to solemnise our union before God. We are happy that we have managed to do this and I hope our youngsters have learnt a lesson or two from this. I attended school here hence it feels good to be back after so many years to solemnise the union with my wife here. Everyone in the family and colleagues are happy that we have done this.”

MP Sanyatwe said: “I really want to express my joy at having managed to accomplish this. Yes, we had our wedding at court but I have always wanted to have this hence the joy. I really want to urge people from different walks of life to emulate this.”

Government and ruling Zanu PF party officials that include Minister of State for Manicaland Affaris and Devolution Cde Nokuthula Matsikenyere, Deputy Minister for Transport and Infrastructure Cde Mike Madiro, Nyanga North Member of the House of Assembly Cde Supa Mandiwanzira and a number of army Generals attended the wedding.