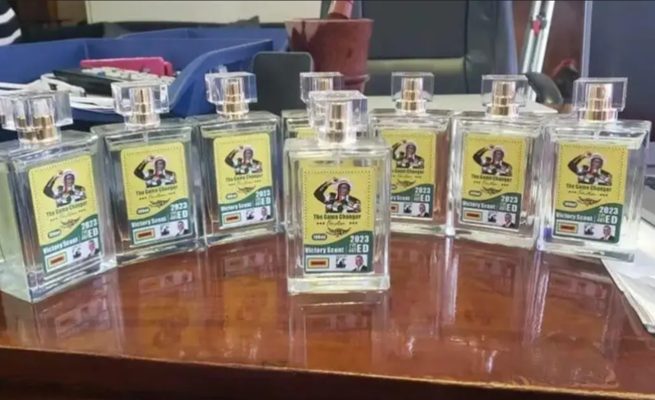 As Zimbabwe heads for the 2023 presidential election, President Emmerson Mnangagwa has been trying to win support from new voters.

Mnangagwa, also known by his initials ED, has set up “empowerment programmes” such as Young Women for ED (YW4ED), Men BelievED, a new teachers’ union Teachers for ED, ED 2023 premium bread, Councillors for ED (C4ED), Young Pastors for ED  and a recent comical initiative that has been making the rounds on social media — a perfume — ED 2023 victory scent.

The programmes come with much fanfare in flashy, expensive cars and branded clothing in Zanu-PF colours to lure voters.

At a recent Young Women for ED business convention, Mnangagwa addressed a packed venue, saying the aim of the programme is to celebrate women and provide “broad, inclusive opportunities”.

“Your role in our nation’s quest to modernise, industrialise and realise the sustainable growth of our economy is invaluable. Rest assured that the second republic will continue to avail broad, inclusive opportunities and support to you all.”

Men BelievED, with the mantra “ED promised, ED delivered”, describes itself as a movement of empowered entrepreneurs who support Mnangagwa’s vision. On the Men BelievED website, it states its priorities are creating jobs, free education and women’s rights.

Journalist Hopewell Chin’ono said: “95% of Zimbabwe’s potential workforce is unemployed, central hospitals have no paracetamol, the whole country has no clean drinking [or] running water, schools have no books, roads are potholed, the country has the highest inflation in the world and Mnangagwa campaigns for 2023 with perfumes? These guys are jokers.

“They are essentially saying Zimbabweans are clowns, give them cheap perfume and they will vote for Zanu-PF.”

95% of Zimbabwe’s potential workforce is unemployed, central hospitals have NO paracetamol, whole country has NO cleaning drinking running water, schools have NO books, roads are potholed, the country has the highest inflation in the world, and Mnangagwa campaigns with perfumes? pic.twitter.com/aA55fNJE6F