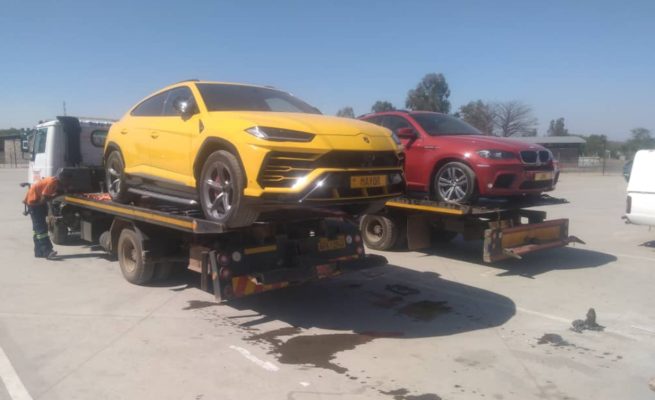 A FLEET of haulage trucks belonging to the Member of Parliament for Gokwe-Nembudziya, Justice Mayor Wadyajena, through his company Mayor Logistics, can now be seized by the Zimbabwe Anti-Corruption Commission (ZACC) and held pending the outcome of a fraud trial of Wadyajena and four top Cotton Company of Zimbabwe managers or an associated civil action.

In addition to the 22 trucks listed in the court order permitting the seizure, the same order allows ZACC to hold two luxury cars, a Lamborghini and BMW X6, temporarily held by Beitbridge authorities on Friday while they were on their way to South Africa.

The five are accused of diverting Cottco money meant to buy bale ties to buying the trucks now allegedly being used by Wadyajena. But the trucks and other assets now being sought and seized are more likely to be forfeited to the State in a separate civil application under a law meant to reclaim assets acquired through unlawful activity.

While criminal charges have to be proved beyond reasonable doubt, civil proceedings are decided on the balance of probabilities and the difference has seen assets forfeited even when there is no successful criminal prosecution.

The assets facing seizure are 22 haulage trucks and the two luxury cars allegedly bought with funds diverted from Cottco. At the weekend, ZACC obtained a warrant of search and seizure of these assets belonging to Mayor Logistics from Harare magistrate Ms Barbara Mateko.

According to the warrant granted to ZACC, the managing director of Mayor Logistics (Pvt) Ltd and Wadyajena or any other person in authority or control of the vehicles are ordered to release them to Victor Masimba, an investigating officer from ZACC.

National Prosecuting Authority prosecutor Ms Audrey Chogumaira, in her ex parte application, told the magistrate that there is likelihood of dissipation of the trucks considering the fact that Wadyajena has now appeared in court and might abscond from Zimbabwe, despite his bail conditions that include $200 000 bail and the surrender of his title deeds and his passport.

She said the haulage trucks which allegedly constitute proceeds of crime are now used on transborder business hence they were likely to be shipped out of Zimbabwe to foreign countries especially South Africa where they will be difficult to repatriate to Zimbabwe.

“The criminal investigations underway revolve around fraud and laundering of the specified movable property hence the need for seizure of the same by the Zimbabwe Anti-Corruption Commission pending further processes in terms of the Money Laundering and Proceeds of Crimes Act, and most specifically the civil confiscation to be sought within that period by the applicant,” she stated in her papers.

“The purpose of this property seizure order is to preserve the said property from dissipation or alienation pending investigations into allegations of fraud and money laundering.”

This order will remain in force until the criminal proceedings and civil confiscation proceedings by the National Prosecuting Authority against Wadyajena and his company are terminated unless varied or revoked by a court order.

Last week, Wadyajena and his accomplices were granted $200 000 bail each by a Harare regional magistrate Mr Stanford Mambaje who ordered them to surrender the title deeds to their personal properties as surety.

Wadyajena and the Cottco bosses are alleged to have converted money which was meant for the importation of bale ties and bought the trucks through Mayor Logistics, where Wadyajena is believed to be a director, and allegedly diverted a second order for ties to energy companies.

In his bail ruling, Mr Mambanje said the State, through ZACC investigating officer Mr Arthur Murambiza, failed to place before the court a compelling reason that warrants continued detention of Wadyajena and the Cottco bosses, who are all expected back in court on September 8.

In another case involving assets, the NPA has obtained unexplained wealth orders at the High Court against former Finance and Economic Development Ministry official Marcos Nyaruwanga and traditional healer Ester Mutesvu to explain how they have acquired their assets, which are suspected to have been bought through ill-gotten proceeds.

According to the order against Nyaruwanga, he is asked to give a sworn statement to the head of ZACC’s Asset Forfeiture Recovery Unit, explaining how he acquired his Hatfield property plus five top-of-the range Mercedes Benz vehicles, five Toyota vehicles, a Honda Accord, a BMW320i and a Nissan Murano.

In the order, Nyaruwanga is required to give details of the costs incurred in obtaining the listed assets and produce all the supporting documents and receipts showing proof of legitimate business and source of income for their acquisition.

In the case of Mutesvu, the NPA have sought an order barring her from disposing her assets comprising a house at Aspindale Park in Harare bought for US$58 000, a Toyota Hiace bought for US$10 200 and a Toyota Axio bought for US$4 600, plus all her household property until the criminal matter in which she is being prosecuted for money laundering has been finally disposed of.

Mutesvu is also required to give a sworn statement setting out the commercial use and such income derived from the property or dealings with the property by her from the day of acquisition of such property to date.

Former Croco Motors employee Joseph Matinyarare, who is facing charges of theft of trust property after he stole motor spare parts also had his two residential properties in Arlington Estate and Southlea Park plus three vehicles a Toyota Rav 4, Ford Ranger and an Iveco lorry seized by the State.